The expert contractors behind the new Genoa Bridge

From Trentino to Calabria, companies came from all across Italy to help build the Genoa Bridge

Genoa Bridge: the finish line is in sight

Genoa: voices from the bridge

The new bridge over Genoa’s Polcevera River has replaced the Morandi less than two years after its tragic collapse. This could not have been possible without the 1,000 engineers, technicians, workers who completed construction in little over twelve months. But just as fundamental were hundreds of more people working behind the scenes: the suppliers, contractors and sub-contractors, from all over Italy who made their contribution to giving back Genoa its bridge.

A total of 330 companies of all sizes worked on the construction of the bridge, which is due to be reopened to traffic in early August.  Almost all of them, more than 99%, are Italian contractors specialised in a wide range of works, from reclaiming war ordnance to preparing foundations; from laying decks to wind tunnel testing; from the photovoltaic panel production to the supply of steel.

These people and companies have all made a valuable contribution to the commitment of the Webuild Group, which together with Fincantieri has succeeded in creating a positive synergy with the many contractors of the Genoa bridge, working in tandem on a multi-track worksite that allowed the bridge to be delivered in record time.

330 contractors in the cluster that built the Genova bridge

Contractors of Genoa bridge: expertise from every Italian region

Each of Italy’s 20 regions was represented among the 130 contractors and 200 sub-contractors who took part in the bridge’s construction. From Trentino to Sicily, from Lombardy to Apulia, the supply chain was made up entirely of Italian companies, with the sole exception of one Turkish and one German company. And 54 out of 330 contractors came directly from Genoa and Liguria, demonstrating how the technical excellence of this industrial region contributed to realisation of the work.

All in all, the cost of the bridge’s contractors was €160 million, about 80% of the total value of the order – demonstrating the economic importance given to the companies involved.

Numbers can only partially tell this story. It comes to life when individuals who helped make history share their experience. Maurizio Ruggieri is one of the technical directors and partners of Faver spa, a company based in Bari that created the “flagpoles” standing 28 metres (98 feet) high, similar to the masts of a ship, which illuminate the bridge.

“Everything started with a drawing, and from there, together with the project manager of the bridge, we worked on the design and its realisation,” he recalls. “Today, to see them standing, they look like tapered pins, with two lights. The first light is 14 metres (45 feet) up, specially designed by Guzzini. The second light is at 28 metres (91 feet), for airplanes.”

The flagpoles have a diameter of 50 centimetres (20 inches) at their base, which gradually narrows to only 7 centimetres (11 inches) at the top. The 13 tubes were assembled section by section, after each section was machined with a lathe to reach the perfect cone shape. Once assembled, the cones take on the form of a flagpole, which was then finished by grinding all the welds to zero, so that it appeared as a single piece, from the base to the head.

“It took four months of work to make them,” says Ruggieri. “working at full speed to ensure delivery on a very rigorous timetable. This forced us to work even during the lockdown, thanks to an authorisation from the Prefecture that allowed us to continue working with the right safety procedures in place to protect our people.”

From the top to its foundations, the bridge tells a story of excellence and passion. Fondamenta srl is the company that built the foundations on which the entire structure of the bridge stands. There are dozens of cement giants, 50 metres (164 feet) high and with a diameter of 1.5 metres (4.9 feet) each, hidden entirely underground.

“In Genoa we were commissioned to complete 14 foundation works, 9 on the west side, 4 on the east side and one on the west shoulder,” explains Paolo Muneretto, engineer, partner and board member of Fondamenta srl.

In order to build these foundations, Muneretto used extremely innovative and powerful machines weighing over 100 tons each. They move on tracks and have a vertical arm that rises for over 30 meters (98 feet) with a drilling rod on the end that perforates the earth. After the drilling process is completed, concrete is poured into a mold embedded at the bottom of a hole 50-metres (164 foot) deep, which becomes the foundation pole. The upper part of the foundation pole, which emerges from the ground, is then enclosed inside the massive bottom part of the pier that supports the bridge.

Like Faver and Fondamenta, many other companies have made a specific contribution to this infrastructure work. The Acciaierie Valbruna, an Italian leader in the production of special steels since 1925; Bosco Italia, which is currently assembling the photovoltaic panels needed to make the bridge self-sufficient, as well as the glass protection panels; and Akron and Geoinvest, contractors of the Genoa bridge specialized in geophysics and in charge of the underground surveys.

Some of the companies involved in building the new bridge tell a story that is in many ways unknown. Drafinsub was called to check for any unexploded World War II ordnance, something that is necessary before the construction of any kind of infrastructure. And the Milan Polytechnic tested a model of the bridge in a wind tunnel for aerodynamics. These different examples of expertise say a lot about the level of Italian industrial know-how. 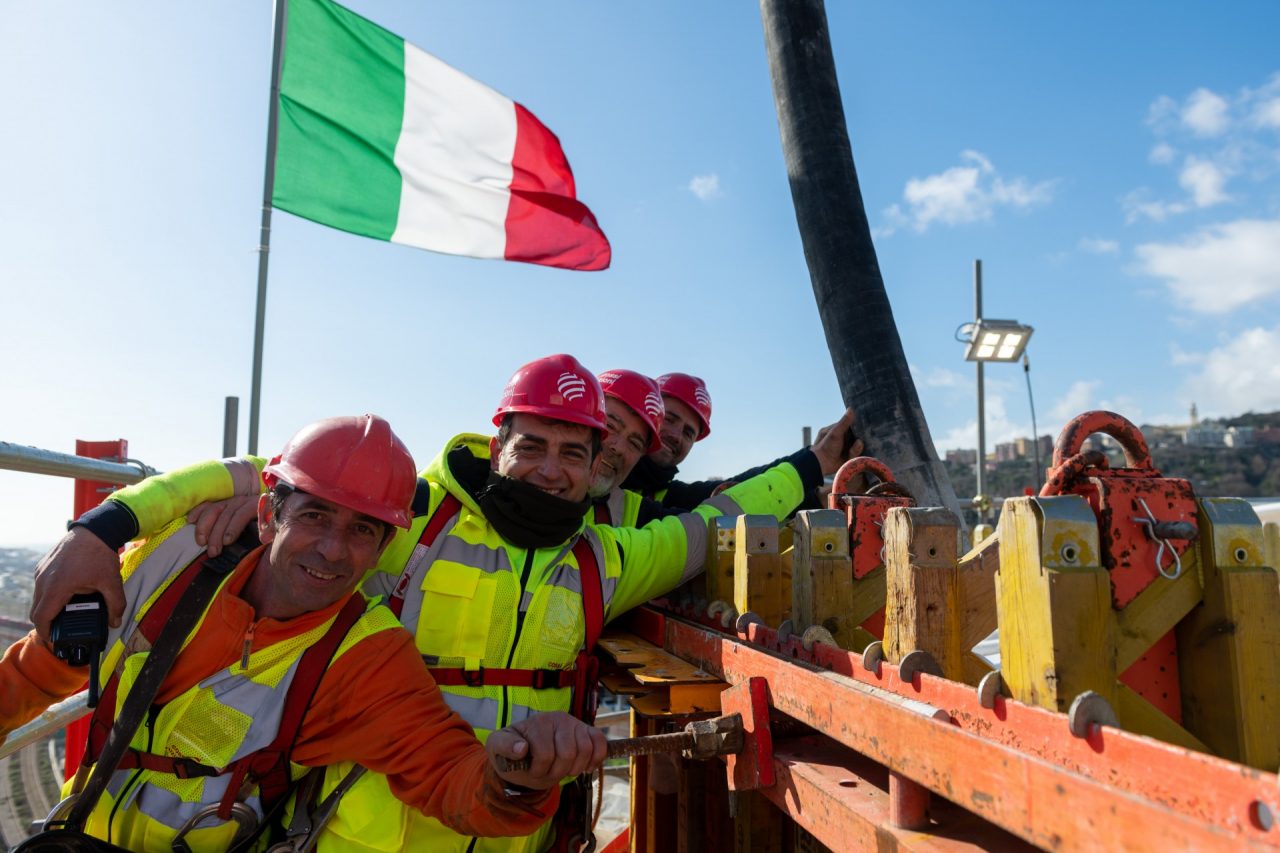 Organisation for a “fast track” worksite

Contractors of the Genoa bridge worked together like an orchestra to get the new bridge built as quickly as possible. Technical excellence and passion for this work were the essential ingredients, accompanied by a unique organisational ability — which the Webuild Group has adopted from systems it has already used in its large construction sites around the world.

In Genoa, Webuild implemented a “fast track” system at the worksite that called for different tasks to be carried out in parallel by setting up several construction sites simultaneously, each of which is managed efficiently and integrated with the others. For example, in the so-called “dressing” of the bridge (the final phase just prior to inauguration), 40 teams are operating at the same time, with over 200 workers synchronised in perfect coordination.

Just like musicians in an orchestra, with dozens — or rather hundreds — of suppliers, each of whom have made a decisive contribution, expressing the best that Italy has produced in the world of infrastructure.

Progetto Italia moves ahead: Webuild ready to invest in Astaldi