In the past five years, the number of women managers at U.S. construction sites has risen 101%

Women: Blazing a trail in infrastructure

From Texas to Florida, from California to Ohio, women are becoming more visible in the infrastructure sector, increasing their numbers in the ranks of managers and engineers who guide the sort of advanced, complex works that the United States needs to stay competitive.

This significant leap is documented in the 2020 edition of the “Fastest-Growing Jobs for Women in the U.S.“, a study carried out by the company SmartAsset using official data collected by the Bureau of Labor Statistics between 2015 and 2019.

Over the past five years, the number of women in management positions in the construction industry has risen from 49,400 to 99,400, increasing by 101%, the third-most significant leap forward among all occupations surveyed by the study.

The figure outperforms the average trend in the industry’s overall employment rate. In the same period, the number of employed people grew on average by 35%, three times slower than the growth rate for female workers.

These numbers point to an historic shift that, however, is still only just beginning, in the United States as well as on construction sites in London and other major cities, The same study confirms that in the construction sector, 90% of managerial positions are still held by men.

While the number of women in managerial positions in the construction sector is now close to 100,000, the total number of women working in the sector has exceeded 1 million. According to data from the Bureau of Labor Statistics, there are 1.1 million women working on construction sites in the USA, compared to 10.2 million men. Despite this disparity in the overall figure, the sector boasts an important record: the wage gap between men and women is the smallest, at 3.7% in favor of men compared to an average of 19% for all other sectors.

Construction Dive has unpacked the U.S. Census Bureau numbers to find out which American cities are the most attractive for women working in construction. Leading the ranking in the U.S. is Minneapolis, Minnesota, where 19.1% of the workforce on construction sites is made up of women, who earn an average salary of $54,521. In second place behind Minneapolis is Seattle, in the state of Washington, a city with a bustling port. In Seattle, the percentage of women engaged in the industry is 17.6%, and the average salary $70,966. Behind Seattle, San Francisco is in third place, where average wages are still quite high ($70,711) and where 17% of the workforce is made up of women. 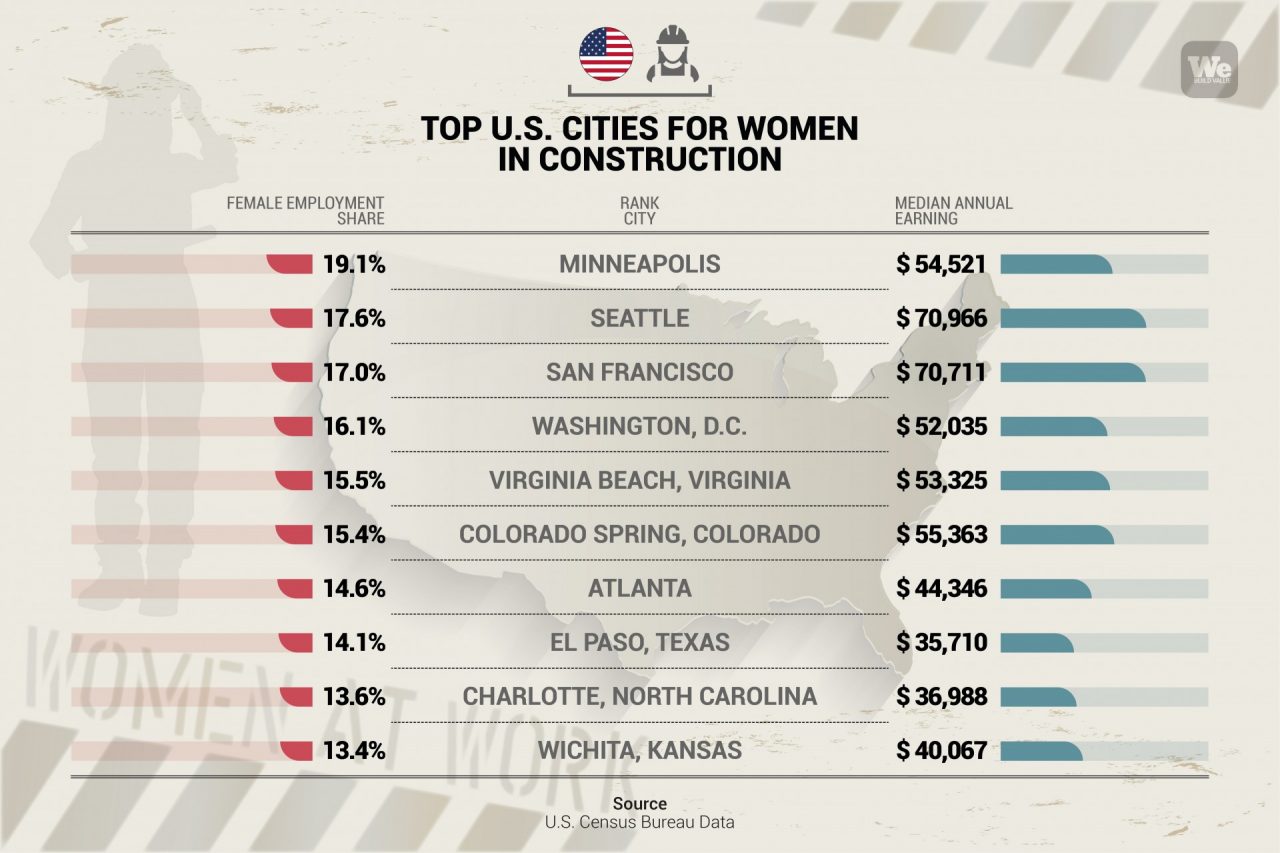 Professional women in construction and the impact of Covid-19

Quality and skills are the reasons why women are entering this market in droves: the women hired in recent years by the American construction industry are engineers and technicians. The statistics confirm it: between 2015 and 2019, the number of female civil engineers increased by 46%, from 45,400 to 66,000.

What hasn’t yet been analyzed by the Department of Labor’s data is the economic impact that the Covid-19 pandemic will have on the industry and its changing workforce.

“We clearly have much more work to do as an industry to recruit, hire and retain a more diverse population of workers, particularly women,” Brian Turmail, vice president of public affairs and strategic initiatives at the Associated General Contractors of America, told Construction Dive. “The good news is we are heading in the right direction. Moving forward, [the AGC is] committed to redoubling our efforts to attract an even more diverse construction workforce.”

The challenge of work in the time of Covid-19

The achievements of the last five years must now be put to the test during the economic crisis created by the pandemic lockdowns. To date, of the 22 million jobs lost in March and April, the U.S. labor market had recouped 12.4 million of them in November, confirming that there is still a long way to go to return to pre-crisis conditions.

Looking at the construction sector, 27,000 jobs were added in November, confirming a new vitality and the almost complete reopening of construction sites throughout the country. However, these figures are still partial. There are two fundamental variables that could have an effect: the first is the introduction of the vaccine, which in the coming months should ensure widespread immunization of the population; the second is Joe Biden’s arrival in the White House, scheduled for January 20. The future President has already announced a new era of investment to lift the country out of one of the most serious crises of recent decades.

Guangzhou Opera House: the story of the theater on the river