From the Grand Paris Express to the city’s Metro lines, the future of transport is sustainable mobility

Paris-Saclay: ready for the Grand Paris Express to arrive

Tomorrow’s Paris is rising from the construction sites

At a time when France is dealing with a new surge of Covid-19 cases, Paris is launching two messages of hope for the city’s future.

The first comes from Mayor Anne Hidalgo, who presented an ambitious sustainability-inspired redevelopment project for the Champs-Élysées. With an investment of €250 million, one of the most beautiful and best-known avenues in the world will be transformed into a green oasis in the center of the French capital, ready — at least according to the words of the mayor – to become a symbol of the 2024 Summer Olympics to be held in Paris.

Sustainability is the key feature of another strategic area of the city’s life: transport. Despite the inevitable impact of Covid-19, and the natural delays to some of the projects, Paris has never stopped working on its plan to revamp its urban mobility system, first and foremost with the Grand Paris Express.

No stopping the Grand Paris Express

Covid-19 didn’t succeed, despite the impact the pandemic had on France, in forcing the city to put its infrastructure plans on hold. The construction sites building the Grand Paris Express are still open. In recent months protocols and security measures have been activated to reconcile the need to complete this strategic work with the safety of technicians and workers engaged in the construction of the work.

This new public transport network, considered one of the most ambitious sustainable mobility projects in the world, was launched in 2013 with a targeted completion date in 2030.  The project calls for extending existing lines such as the 14, and the construction of four new lines, the 15, 16, 17 and 18. The 15 runs in a large circle around the city’s suburbs, the huge urban agglomeration that makes up Greater Paris, while the 16, 17 and 18 will connect other suburbs and municipalities outside the city of Paris.

To give an idea of how the construction has kept up the pace even during the Covid-19 pandemic, work has started on line 15, and the tunnels should be completed by the end of 2021. Construction work on the other three lines should also begin this year.

These are complex and strategic projects that are part of a new network that will be 200 kilometres (124 miles) long, with 68 stations for total investment of around €35 billion.

All this to serve one of the largest and most populous metropolitan areas in Europe and support Paris in its goal to become a carbon neutral capital by 2050. 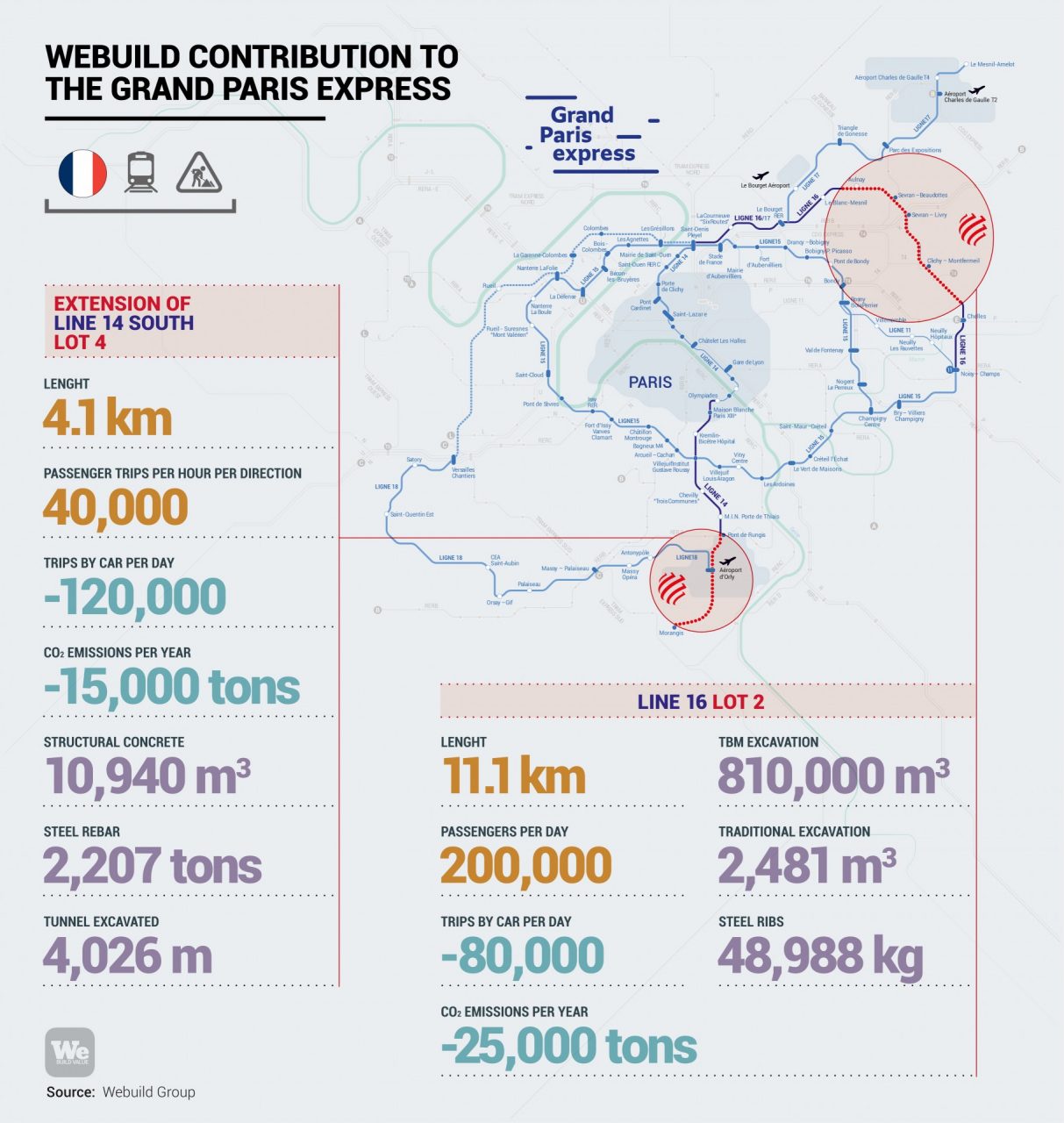 Work on the Paris metro continues

The Grand Paris Express is not the only example of a worksite that stayed active during Covid-19. Indeed, during 2020, Line 14 also underwent extensive maintenance, while work continued on the extension of Line 11.

According to the city administration’s plans, Line 4 of the Metro, in the southern area of the city, is also being extended by a couple of kilometers with the construction of two new stations. Currently the line stops at Montrouge, a banlieu in the south of the city, while the extension will bring it to Bagneux, even further south.

Work on these lines has suffered some delay due to the pandemic, especially during the peaks of the contagion. But work never completely stopped, and the public transport company RATP’s website says it will be finished in 2021.

In addition to Line 4, which cuts through the city from north to south, Line 12 is also undergoing extension work in the southern area that also includes the construction of two stations. Again, the pandemic has caused some delays in the work schedule and the stations, according to the latest forecasts, will be open no earlier than spring 2022.

The theme of mobility and the ambition to give residents and tourists alike a livable, efficient and sustainable city remain at the top of the active policies of the Hidalgo administration. In addition to the Grand Paris Express, which is supported by the state, and other subway lines under construction, Paris is betting heavily on the efficiency and ubiquity of transport. It is doing so by intensifying its streetcar network through a new project that aims to inaugurate new lines connecting the center of Paris with Orly. This surface transport network, after delays due to Covid, should become operational as early as April this year.

According to newspaper “Le Parisien”, the administration said starting in January it will automatically partially reimburse travelers holding a Navigo pass who suffer delays on the transport network over a period of months.

Punctuality, efficiency and sustainability are therefore the guiding principles for the French capital as it improves its transport network, with the aim of taking a step forward in the eternal competition between the Paris Metro and the London Underground.

Investments and infrastructure: the coronavirus is no match for Abu Dhabi’s ambitions