Southern Italy short on water: a crisis in the ‘Mezzogiorno’

Minister for Southern Italy Mara Carfagna recently confirmed Prime Minister Mario Draghi government’s intention to allocate 40% of the Recovery Plan’s resources to the South, with particular attention to the water issue. Alongside Carfagna’s announcement is a newly-published list of 57 stalled public works that will be resumed, and the appointment of 29 special commissioners who will ensure that projects move ahead quickly.

Of the €83 billion ($96 billion) these works are projected to cost, €2.8 billion ($3.3 billion) will be allocated to water infrastructure, €501 million ($603 million) of which will be set aside for works in the south, specifically two dams in Enna and Catania, overseen by the commissioner Ornella Segnalini.

The government has demonstrated its commitment by reactivating construction sites and resources that will be included in the National Plan of Resilience and Resistance, but those moves are insufficient on their own when assessing the real water needs of southern Italy. A considerable gap must be bridged between the current water infrastructures and the needs of both people and broader urban development.

Italy at risk of desertification

The last two to three years have been a wake-up call for the country. The summer droughts occurring in many regions have confirmed scientists’ theories that the process of desertification across the peninsula has been underway for some time.

According to the CNR (National Research Center), today this phenomenon affects about 20% of the national territory, with a peak of 70% in Sicily.

Combining this data with the findings of ISTAT, the National Institute of Statistics, which show that every year, water loss in the national networks leads to 4.5 billion cubic meters of wasted drinking water (Sicily alone loses 50.5% of the water fed into its supply network), demonstrates that water is an increasingly precious asset. The situation can only be improved through substantial investment, particularly in the national network.

Private water management companies as well as regional and municipal utilities play their part. In the south today, they produce a turnover of €4 billion ($4.8 billion), investing an average of €500 million ($601 million) per year and employing 25,000 people. This sector’s industrial efforts, however, are not enough on their own to ensure water infrastructure efficiency. In addition to general maintenance, these infrastructures are in need of major interventions and renovation. 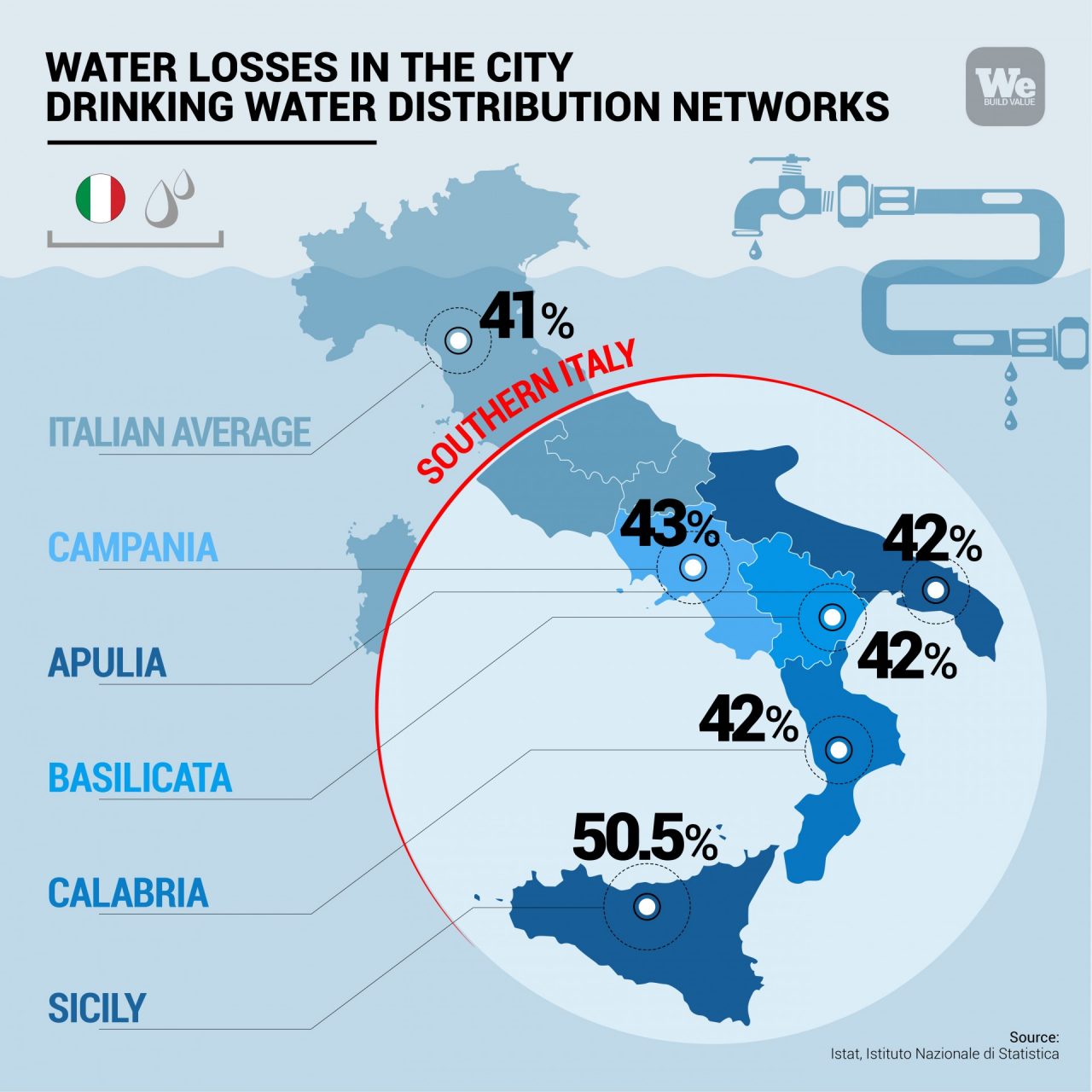 The Italian gap between north and south extends to water. Currently, of the €14.9 billion ($17.9 billion) of public and private funds to be invested nationally in the sector over the coming years, only €3.8 billion ($4.5 billion) will be allocated to southern regions.

The south is looking at fewer resources, then, despite its higher need for investment, based on data on network and water infrastructure quality, where southern regions come in at the bottom of the Italian rankings. Beyond Sicily, where 50.5% of water is lost from the water networks, and Sardinia, where the water loss figure reaches a record 51.2%, the Central Italian Apennines sees an average of 48.4% water loss, and the Southern Apennines, 48%.

There’s high risk of water shortage: last summer’s drought and lack of rain halved the water resources in all of Sicily’s reservoirs. This phenomenon risks becoming commonplace across the southern regions if adequate and timely intervention to restore the infrastructure network does not take place. 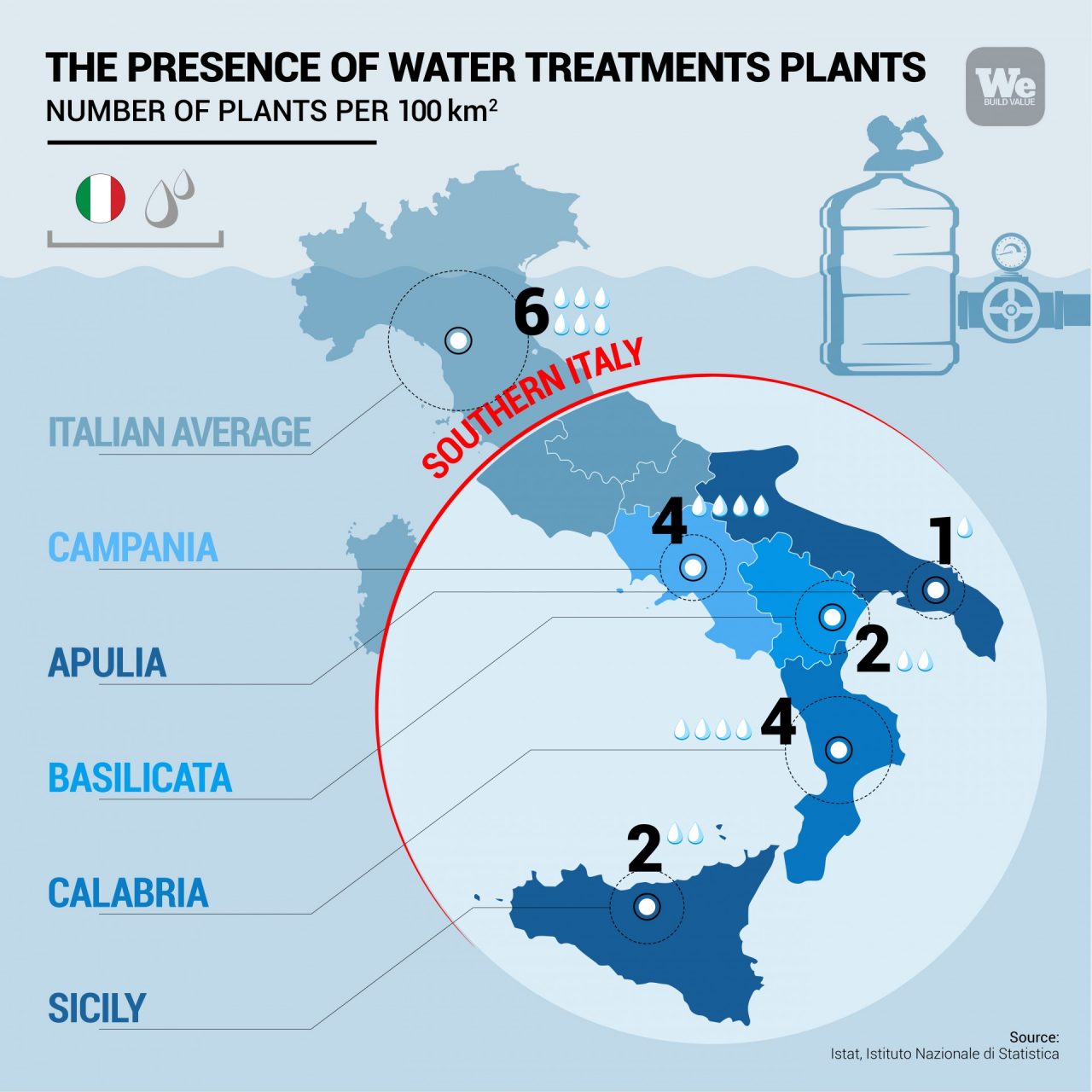 Water investments’ key role within Covid-19 recovery plans is clear from the emphasis the European Union has placed on water management by member countries.

According to ASTRID, 85% of the water-related infringement procedures issued by the European Community against Italy concern the southern regions. Lack of purifiers, inefficiency of sewage systems, challenges in sludge disposal, and inadequacy of dams are the most frequent problems across southern regions.

According to ISTAT, the public municipal sewage service is completely absent in 40 southern municipalities, home to some 394,000 people. Purification services are also absent in 339 Italian municipalities, 66.4% of which are located in southern Italy, mainly in Sicily and Calabria. This is a problem affecting nearly 2 million people throughout Italy, and the crisis levels in the south carry risks for both the economy and for people’s health.

Innovation: testing out the future on the Webuild Group’s construction sites

Copenhagen: an old port transformed into a sustainable neighborhood