From East to West, 4,800 kilometres coast-to-coast: a trip through a great American infrastructure

USA: A trip to the West Coast

Coast to coast, a trip across the United States

Without U.S. Highway 50, the expression “coast-to-coast” wouldn’t make sense. A single journey from the Atlantic to the Pacific, from Ocean City in Maryland to West Sacramento in California, from the sea to the mountains, from the desert to the green prairies, linked by a strip of concrete 4,800 kilometers long (3,000 miles). U.S. Highway 50 was dubbed “the loneliest road in America” by “Life” magazine in July 1986. It is now seen as the backbone of the United States, a true masterpiece of civil engineering, and one of jewels in the crown of the U.S. Highway System connecting the vast nation’s 50 states.

Travelling along U.S. 50, also known as Route 50, is like moving through the country’s history, crossing physical and cultural boundaries, and observing the endless social expressions of a landscape that hosts everything from congested cities to barren deserts.

Coast to coast on the loneliest highway in America

Highway 50, "the loneliest road in America"

Our coast to coast journey begins on the West Coast: San Francisco. Heading east, we leave the Golden Gate behind us in the direction of Sacramento. Soon we are in the middle of the Sierra Nevada Mountains. The stretch of highway that crosses the state of Nevada is definitely the most pristine of the entire route. After passing the picturesque Lake Tahoe, we travel through miles and miles of nothing, where the only things that meet the eye are mountains, deserts and slices of blue sky.  This stretch is why U.S. 50 is called “the loneliest road in America.” The only sign of life on the 461 km (287 mile) stretch between the cities of Fernley and Ely are just two petrol stations. The desert is the star of the show, and it continues in the state of Utah, where the road crosses the Colorado National Park.

Continuing further on, the road cuts the Rocky Mountains in two, just like the mountain range divides the U.S. in two; from there it follows the Arkansas River for a stretch, and the historic Santa Fe railway. Then it starts to cross the Great Plains, endless and desolate, dotted only occasionally by small towns.

The journey continues through Missouri, from Kansas City to St. Louis, crossing the Mississippi River, one of the largest on the continent, and disappears again into the massive spaces of the agricultural heartland of Illinois, Indiana and Ohio.

Kilometre after kilometre, the American continent stretches out ahead and behind. Finally, U.S. 50 reaches Washington D.C., the capital, and ends in Maryland, the opposite bank of the ocean, looking towards Europe and no longer towards Asia. Firmly planted on the East Coast, a world away from the West Coast.

This unique infrastructure is a catapult across a continent; a highway that has become a symbol of the all-American desire to jump in the car and travel to new places.

History and construction of U.S. Highway 50

The origins of America’s loneliest road pre-date the Interstate Highway System created by President Eisenhower after World War II. The U.S. 50 was designed in 1925 and construction began in 1926. The complexity and length of the route meant that the construction sites had to be parceled out. Some places such as Sacramento in California were the first to move, completing the work and even extending it, and in 1930 the route was extended to San Francisco. In other cases, the work continued for decades right up to the 1950s. For example, until 1949 the highway in Maryland stopped at Chesapeake Bay, where the cars were loaded onto ferries and resumed their journey on the opposite bank. The construction of the Chesapeake Bay Bridge in 1952 united the two parts divided by the bay and added another stretch of road to the incredible journey on the U.S. 50. 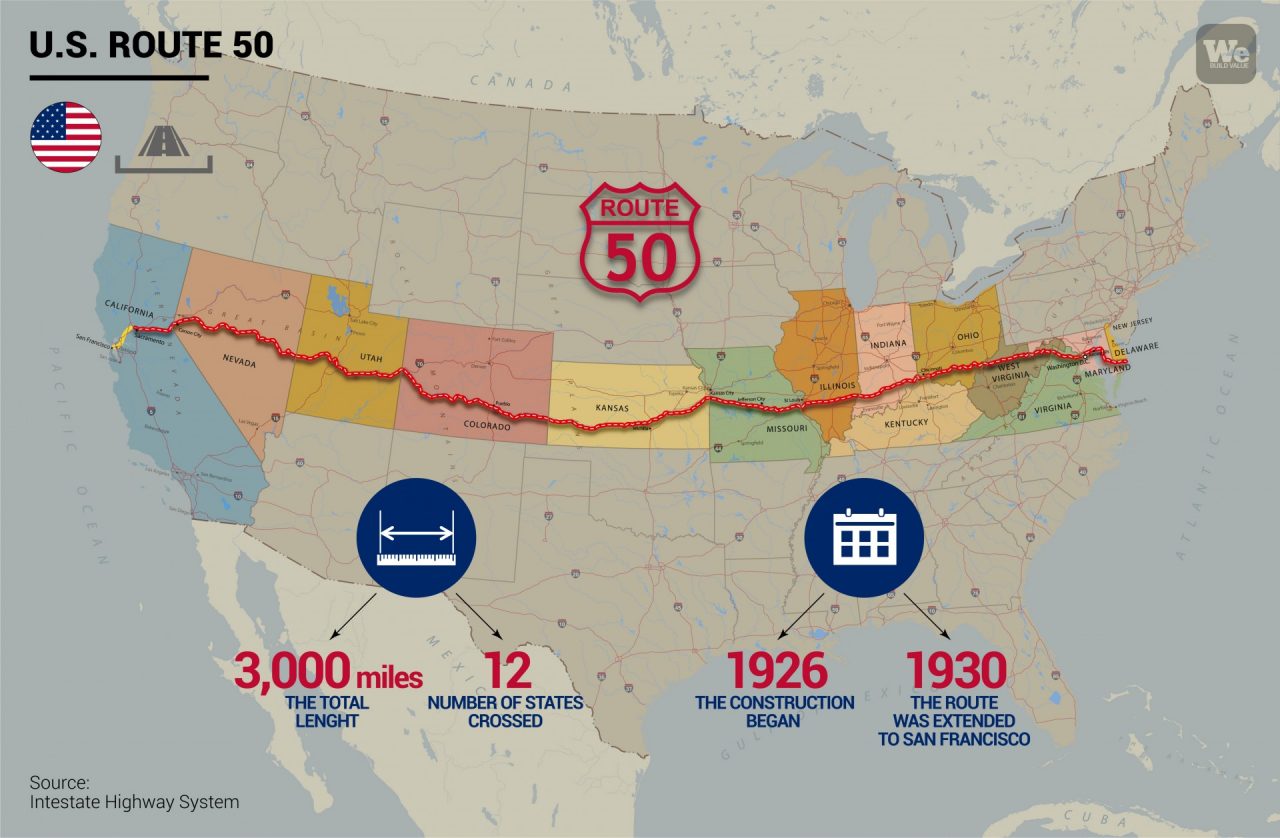 Highway 50 and its world records

The U.S. 50 stands out from other routes because of its designers’ visionary ability to join different stretches of existing state roads, thus transforming them into a single major thoroughfare cutting across the country coast-to-coast.

All this has earned the highway one record after another. Its length, the number of states it crosses, and the characteristics of the places it runs along are now part of its history. Covering its endless route means crossing 17 mountain passes (with the highest at 2,100 meters, or 6,889 feet, above sea level), but also driving on all sorts of different roads. In Carson City, for example, the average daily traffic is 52,000 vehicles, compared to just 530 on the road near Duckwater.

Apart from its incredible usefulness as an infrastructure, this work over the years has come to symbolize the United States and become a tourist attraction on its own, famous across the U.S. It all started with “Life” magazine and an article that called the Nevada stretch “the loneliest in the country.” The writer of the article didn’t mean it as a compliment. But the Nevada state authorities turned it into a marketing stunt. The Nevada Department of Transportation put that definition on all of Highway 50’s road signs, and the Nevada Commission on Tourism even made a “survival guide” that travelers could fill with stamps of every location they visited.

From that moment on, the highway created to connect the American states became a symbol of the dream of travelling “coast-to-coast”, a hop from one ocean to another, driven only by the desire for discovery.