The United States and its water challenge

Rekindling the spirit of the U.S. forefathers

The key ingredient in the recipe to relaunch the United States’ economy after the Covid-19 crisis will be infrastructure investments in major cities. Especially in cities, where the epidemic’s repercussions on work and overall well-being will be felt most acutely.

The National League of Cities (NLC), an organization representing and analyzing the economic status of the major American metropolises, recently focused on this issue with a study involving 1,100 municipalities. It found that city governments will have to contend with $360 billion in lost revenue over the next three years. As a result, 74% may be forced to enact cuts-driven policies, including in the infrastructure sector. In particular, if the situation does not change in the next few months, 65% of major cities will have to make cuts in capital expenditure and specifically in investments in major building projects.

The NLC study suggests that this risk could be averted if both federal and individual state governments committed more substantially to growth-centred policies and helped local governments to cover financial gaps brought on by the virus.

In a statement on the study, Clarence Anthony, CEO of the National League of Cities, remarked, “Without congressional action now, the forced delay or cancellation of infrastructure projects will create an economic ripple effect throughout the nation not felt in decades.”

The Moving Forward Act and the Congress’ plan

The federal government and Congress seem to have listened to the cities’ pleas and are currently working on development plans for boosting the economy over the medium and long term, once the immediate emergency has ended.

In late June, Congress introduced a new $1.5 trillion infrastructure bill, The Moving Forward Act, part of the larger project INVEST in America (Investing in a New Vision for the Environment and Surface Transportation Act).

The plan takes the place of FAST (Fixing America’s Surface Transportation Act), which came to a close on September 30, 2019, and must now be refinanced by Congress. Its future, however, depends on the outcomes of partisan debates between Republicans and Democrats, and the bill’s successful passage through the Senate after having passed in the House on July 1.

In the meantime, early details have already emerged on the financing distribution front. Three hundred billion dollars will be invested in maintenance of major bridges with the greatest structural problems; $100 billion, in housing; $40 billion in wastewater management and $25 billion in drinking water infrastructure; $70 billion in renewable energy and the electricity grid; $30 billion in hospitals and the health sector; and $3 billion in the coasts of the Great Lakes and for protection of some marine coastal areas. 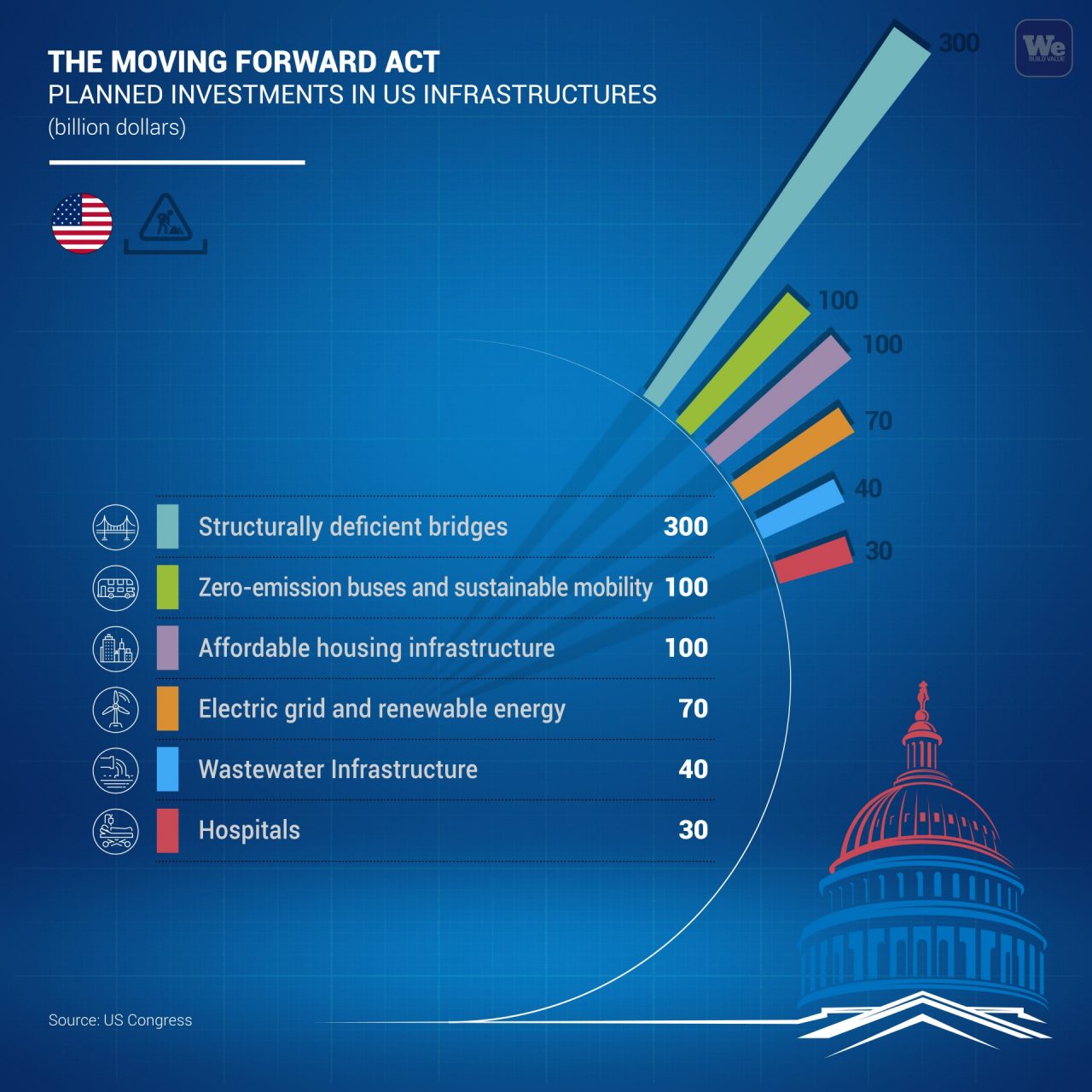 The issue of infrastructure has been a central point of U.S. political debates for years. Both the Obama and Trump administrations repeatedly highlighted the strategic value of investments in the sector, with the current president planning for a new season of major investments in public works as a driving force for the U.S. economy.

The Moving Forward Act, a current cornerstone of the debate, is aimed specifically at this goal. With its endowment of $1.5 trillion, it promises to put the country’s production system back on track.

At the heart of the plan is investment in traditional infrastructures that the ASCE (American Society of Civil Engineers) has defined as structurally deficient and dangerous.

This means that roads, bridges, rail and metro networks, airports and ports are the sectors that will enjoy the most substantial allocations. In addition to the $300 billion set aside for bridge maintenance, $100 billion will be invested in sustainable transport through the purchase of zero-emission buses as well as expansion of city rail and metro networks. Funds for the public rail transport giant Amtrak will triple to $29 billion, allowing for network expansion and modernization of the trains.

The looks to big projects like the construction of the country’s first high-speed train that will travel the distance between Houston and Dallas/Forth Worth in just 90 minutes. This ultra-modern train will run every 30 minutes during peak hours, making a giant step forward for the state in terms of sustainable mobility.

Much will also be done in terms of water management, given the impact that atmospheric disasters such as droughts and floods continue to have on many U.S. regions. Forty billion dollars will be allocated for wastewater management, where high-impact projects are already underway, including the Clean River Projects (where Webuild Group is involved), which involves the cleaning and management of wastewater from Washington D.C.’s major rivers. Some $25 billion will go toward supporting the construction of new water treatment plants, guaranteeing the daily supply of drinkable water in in large cities.

As demonstrated by these reform and development projects, progress is being made. Continued steps are necessary to avert the risk of a prolonged crisis in the largest cities of the  U.S., which are the weakest links in the chain.