Public investments in infrastructure have risen to a 20-year high, while challenges loom such as a possible skilled labor shortage and soaring prices for raw materials

Italy’s economy has bounced back after the Covid-19 crisis with stronger growth than some of the other countries in Europe. But its recovery now faces challenges from increased costs and uncertainty linked to the war in Ukraine.

An annual report on the construction industry from Cresme, one of Italy’s most prestigious research centres, highlights an important economic forecast: government investment in public works in 2025 will return to levels not seen since 2004, a full two decades earlier, when the index of resources allocated to infrastructure reached an all-time high.

According to Cresme’s calculations based on data from the statistics bureau Istat and Italy’s Economy Ministry, in 2021 Italy’s local public administrations have planned investments in the sector of €57 billion ($59 billion)??, unchanged at €57 billion in 2022, €70 billion ($73 billion) in 2023, €71 billion ($74 billion) in 2024 and €75 billion ($78 billion) in 2025. This funding will complete major infrastructure works that are essential for the country’s modernization.

Getting infrastructure works back on track: closing the gap between tenders and awards

Between 2018 and 2021 the figures showed a large gap between announcements and reality. And in fact, in 2018 compared with nearly €30 billion ($31 billion) in published tenders, contract awards only reached €14 billion, or $14.6 billion (less than half). In 2020, this gap peaked with nearly €40 billion in calls for tenders versus €20 billion ($21 billion) in contract awards. It was not until 2021 that the value of contract awards exceeded the value of tenders (€44 billion vs €39 billion) for the first time in a decade. The level of adjudications is essential for measuring the efficiency of the public sector bureaucracy, its ability to follow up on projects, and, above all, the real speed at which construction sites get up and running. And it is precisely the rebound of 2021 that tells the story of how Italy has shifted gears in recent months as it works to set a new pace in the construction of major works.

This and next year will therefore be decisive in making a real breakthrough in reconstruction, but also in the work of upgrading the country’s infrastructure assets. 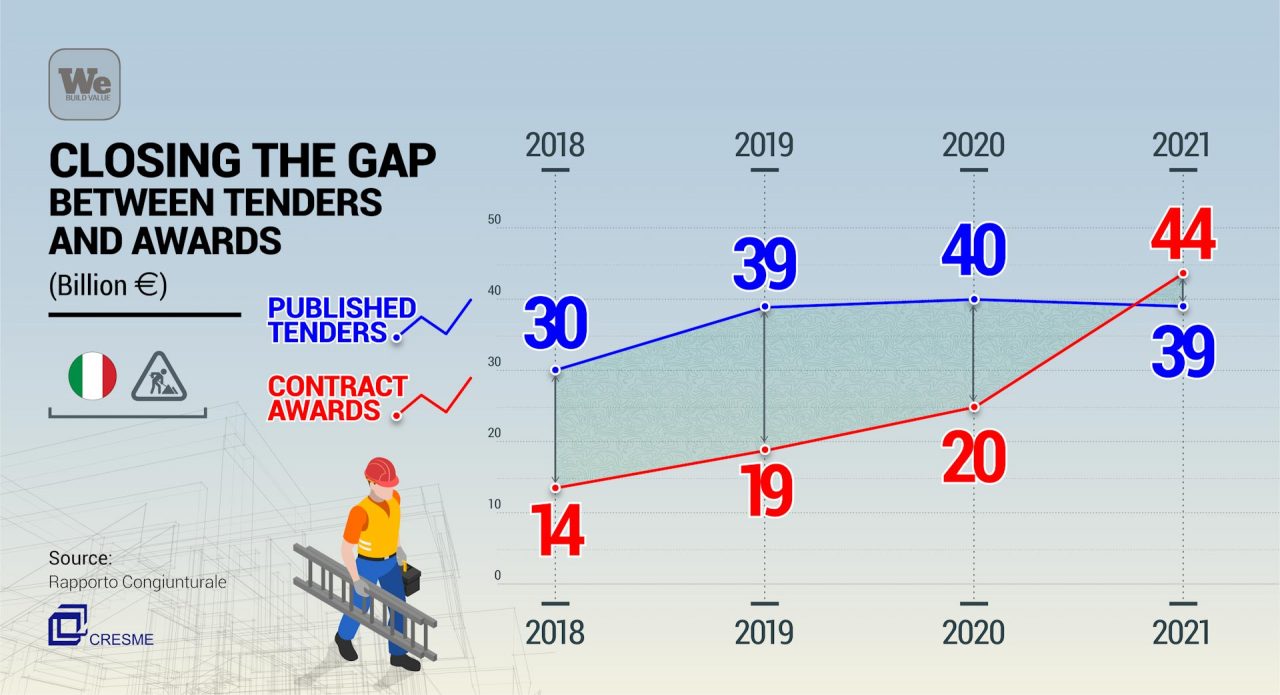 Awarding tenders is not enough. Funding projects isn’t either. Completing major works such as the “Terzo Valido dei Giovi” (the Genoa-Milan high-speed railroad), the new Ionian Highway, the Naples-Bari high-speed railroad, or even the Brenner railroad tunnel requires workers, and especially skilled workers.

The issue was highlighted last week during the awards ceremony of the Alberto Giovannini Prize, “Innovation and digitalisation in infrastructure,” sponsored by the Webuild Group to award 8 training internships to as many young Italian graduates.

Speaking at the awards ceremony, Francesco Giavazzi, economic advisor to Italy’s Prime Minister’s office, said, “When choosing the young people receiving this award today, Webuild looked for the ability to dig beneath the surface. There is a relationship between the prize, the people awarded, and what Italy is doing with its National Recovery and Resilience Plan (NRRP), which focuses on young people, gender balance, and geographical balance. And this prize reflects Italy.”

The “Alberto Giovannini Award,” established in memory of the late Alberto Giovannini, economist and former president of Webuild, gives the 8 winners the opportunity to train within the Group.

“The main value underpinning this award,” explained Webuild CEO Pietro Salini, “is that the first thing to face when innovating is the fear of change. People who are not afraid can challenge themselves and change the future because they innovate.”

Innovation and change will be two key levers for NRRP projects, which belong to Italy’s EU-funded Covid-19 economic recovery plan. A young workforce will be needed to make the infrastructure sites coming online in the next few years run smoothly. “Twenty-five thousand engineers graduate from Italian universities each year,” Salini added, “compared to the 9 million who graduate in India and the 8 million in China. We can close this quantitative gap only with quality.”

Young people must be the standard-bearers of this quality.

Young people thus become the driving force behind the NRRP projects, according to the Minister of Sustainable Infrastructure and Mobility, Enrico Giovannini (no relation to Alberto Giovannini).

“Much of the innovation in infrastructure,” the minister said in his speech at the Giovannini awards, “goes in the direction of sustainability. Compared to our generation, the new generations believe that everything must be geared toward sustainability — not only economic but also social.”

Aside from the injection of skilled labor, a critical issue for the success Italy’s modernisation plan is definitely that of rising prices. The war in Ukraine is not solely responsible for the higher costs of so many of the raw materials essential for the construction of major infrastructure works. The upward trend in prices started back in 2021, and particularly since the second half of last year when the recovery of global demand sent the cost of raw materials soaring.

According to the surveys conducted in April by the Ministry of Infrastructure and Sustainable Mobility, in the second half of 2021 the price of spring steel increased by 84.41%; steel rods for reinforced concrete by 72.25%; steel beams by 66.47%; and railroad tracks by 33.49%.

All the materials needed to build a major construction project have soared, resulting in higher costs for market participants and a natural impact on the operation of construction sites. In this scenario, investments, the availability of resources, and constant dialogue with institutions in search of shared solutions are necessary to find effective solutions to prevent these cost increases from undermining the ongoing recovery.

Italy’s drought: desalination plants and new infrastructure needed to save the country