From Ertan to Three Gorges, the dams that make China run

A look at the engineering skills and innovation behind the construction of China’s massive dams.

The 530,000 places where to produce clean energy

A single hydroelectric plant that can meet 3% of China’s energy needs. Understanding the scope and power of the Three Gorges Dam starts with a journey into the heart of Hubei Province, 185,000 square kilometres (71,600 square miles) and 58 million inhabitants in central China, and north of Dongting Lake, where the Yangtze River flows for more than 6,300 kilometres (3,915 miles) past the megalopolis of Chongqing and ending in the sea.

Making a large part of the Yangtze navigable and reducing its dangerous flooding was one of the reasons for building this huge dam. The Yangtze is the most important waterway in Chinese history, and even today 20% of the country’s gross domestic product is produced from the fertile areas bordering it.

But the dam’s main contribution to the Chinese economy comes from the river’s ability to produce energy, thanks to the huge hydroelectric complex completed in June 2006 with a generating capacity of 98.8 TWh annually. China has developed sophisticated engineering techniques over years for the construction of large hydropower plants. One of these is Ertan, built by Webuild Group on the Yalong River, a tributary of the Yangtze. Construction began in 1987 by bringing the best of Italian engineering technology to China and enabling the country to build what was then one of the three highest dams in the world when it was completed in 1999. 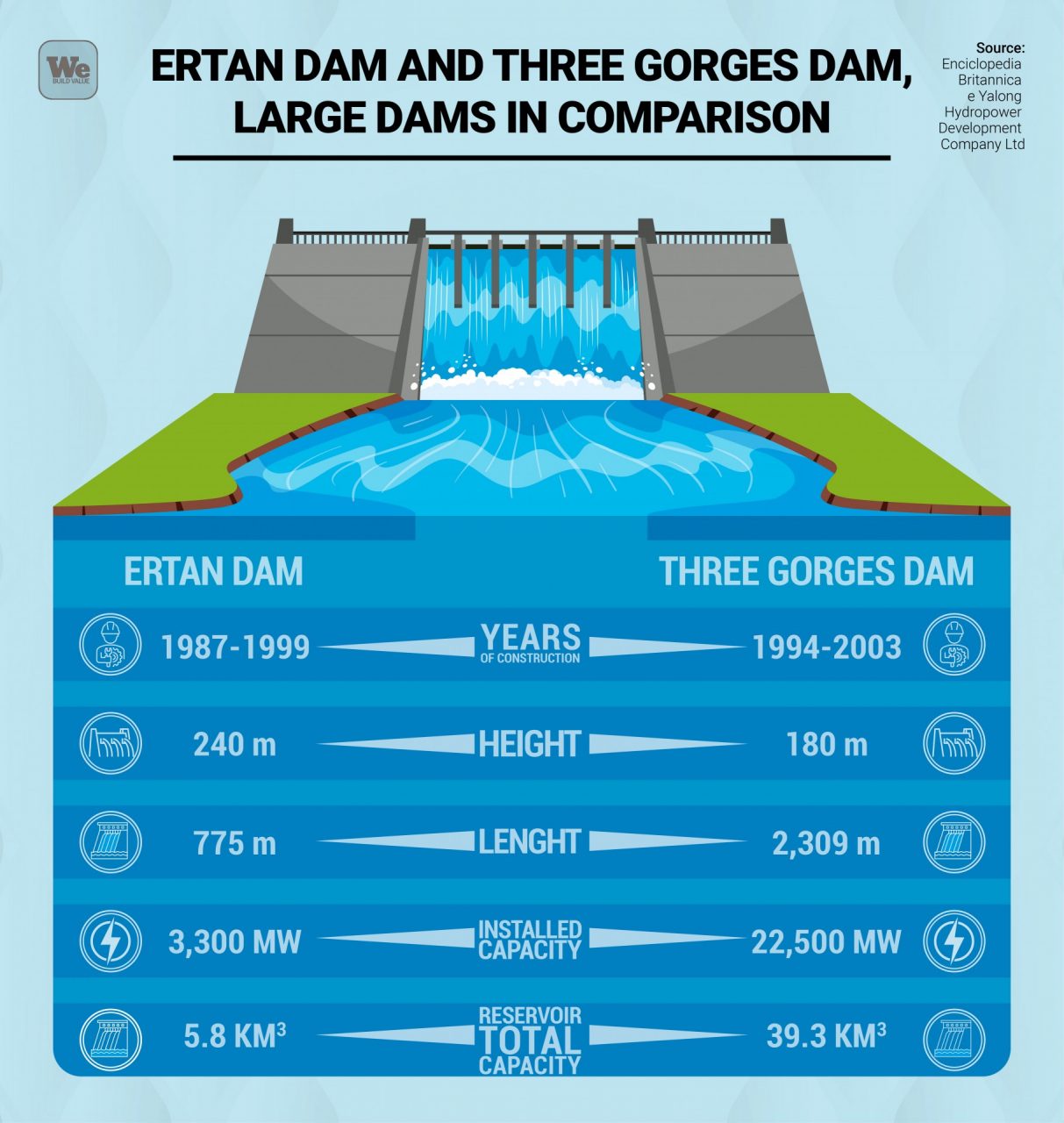 From the top of Chongqing’s skyscrapers, the gaze falls on the Yangtze as it flows through the heart of a megacity of 31 million people, one of the most densely populated urban areas in the world. The river emerges from the shadows of tall buildings and begins to descend toward the green valleys of the province to reach the three gorges from which the dam itself takes its name: the Qutang Gorge, the Wu Gorge and the Xiling Gorge.

The dam profoundly changed the characteristics of the area. To build it, 13 cities, 140 towns and 1,352 villages were submerged, and 1.4 million people relocated elsewhere. The entire region underwent the profound change necessary to build a 180-metre-high (or 594-foot) structure with an overall length exceeding 2.3 kilometres (1.4 miles), but more importantly to create a reservoir longer than 600 kilometres (370 miles) and larger than 1,000 square kilometres (491 square miles), capable of holding 22 billion cubic metres of water.

This complex engineering work is completed by a power plant equipped with 32 turbines, producing the equivalent of 140 million barrels of oil, demonstrating the energy sustainability advantage provided by these concrete giants.

The work also involved other highly complex engineering measures, such as the construction of a ship elevator, the largest in the world. Since 2015 it has been allowing large ships to travel up the river arriving from the sea to the city of Chongqing.

Ertan, the great dam that set the standard

If dams could be categorised into families, Ertan Dam would be the mother of China’s great works. When it was inaugurated in 1999, Ertan was China’s largest dam by capacity, a record it would later cede to the Three Gorges Dam itself.

Ertan, too, dominates a narrow valley, in this case on the Yalong River, in southwest China and about 2,000 kilometres (1,242 miles) from Beijing.

Construction of the work began in 1987, when China began the transformation that has made it into the world’s second largest economy. Ertan was conceived by its backers as one of China’s economic engines. However, precisely because of its complexity, the project was awarded for the first time in China’s history to a foreign group. The Ertan Dam was the first hydropower project that the country opened to international bidding, which was won by Webuild by virtue of its world leadership in the field.

The project was necessary – according to the World Bank, which loaned part of the money for its construction – to meet Sichuan province’s energy demand, which was growing at a rate of 7-8% per year. Above all, it was sustainable. The dam cut coal consumption by 6 million tons each year, according to the World Bank estimates. However, building it required access to international expertise and experts in the field capable of completing such a complex project.

“The power sector in general at that time suffered from a scarcity of skilled manpower, had outdated methods of utility management and lacked modern technology, particularly for power generation,” the World Bank said in a 2005 report.

As a result, Webuild was able to supply its expertise and know-how. This essential experience for China set the standard for the megaprojects that would change the country’s energy balance a few years later.