$1.7 trillion (€1.66 trillion) is needed to revitalise the sector and reduce climate change

The sustainable energy world is looking forward to October 11, 2022: Global Hydropower Day, because hydropower is still the planet’s main source of renewable energy.

Several countries have begun spearheading an opinion movement that supports new investments in hydropower, which are more necessary than ever before in a time when droughts, summer heat and terrible fires are affecting so many countries, from Australia to the United States and from Italy to Germany.

In a global scenario where governments are called on to seek sustainable solutions and also, and more crucially, to address the water and energy crisis now affecting many peoples, hydropower is becoming a way forward because it is sustainable, clean, green and able to curb climate change’s devastating effects. Currently, 60% of renewable energy comes from hydropower. Considering all energy sources including fossil fuels, hydropower itself only accounts for 16% of the total energy produced.

Reaching zero carbon emissions is now a shared goal for many countries. From the Paris Accords to the Climate Pact signed last year in Glasgow, many countries have joined the pledge to reduce air emissions to zero by 2050. To achieve this goal, a focus on hydropower is essential. This was recently confirmed by the International Energy Agency, which in its “IEA Special Report 2021” declared that “Reaching net zero emissions by 2050 worldwide calls for a huge increase in hydropower ambitions.”

Australia has turned to hydropower amid one of the worst droughts in its history in the past decade. The country is investing in iconic projects on the hydropower front, such as the Snowy 2.0, a mega-plant pumping water from the Snowy Mountains that will help meet the country’s increased energy needs. The focus on this kind of technology was also reinforced in September 2021 at the World Hydropower Congress by Australian Prime Minister Malcolm Turnbull: “It will not be possible to deliver on our climate goals unless we start talking seriously about hydropower’s role in strengthening renewable energy systems.”

Like Australia, there are many countries investing in hydropower, including China and Brazil. In fact, the world’s current leading producer of hydropower is China, followed by Brazil, the United States, Canada, India and Japan. 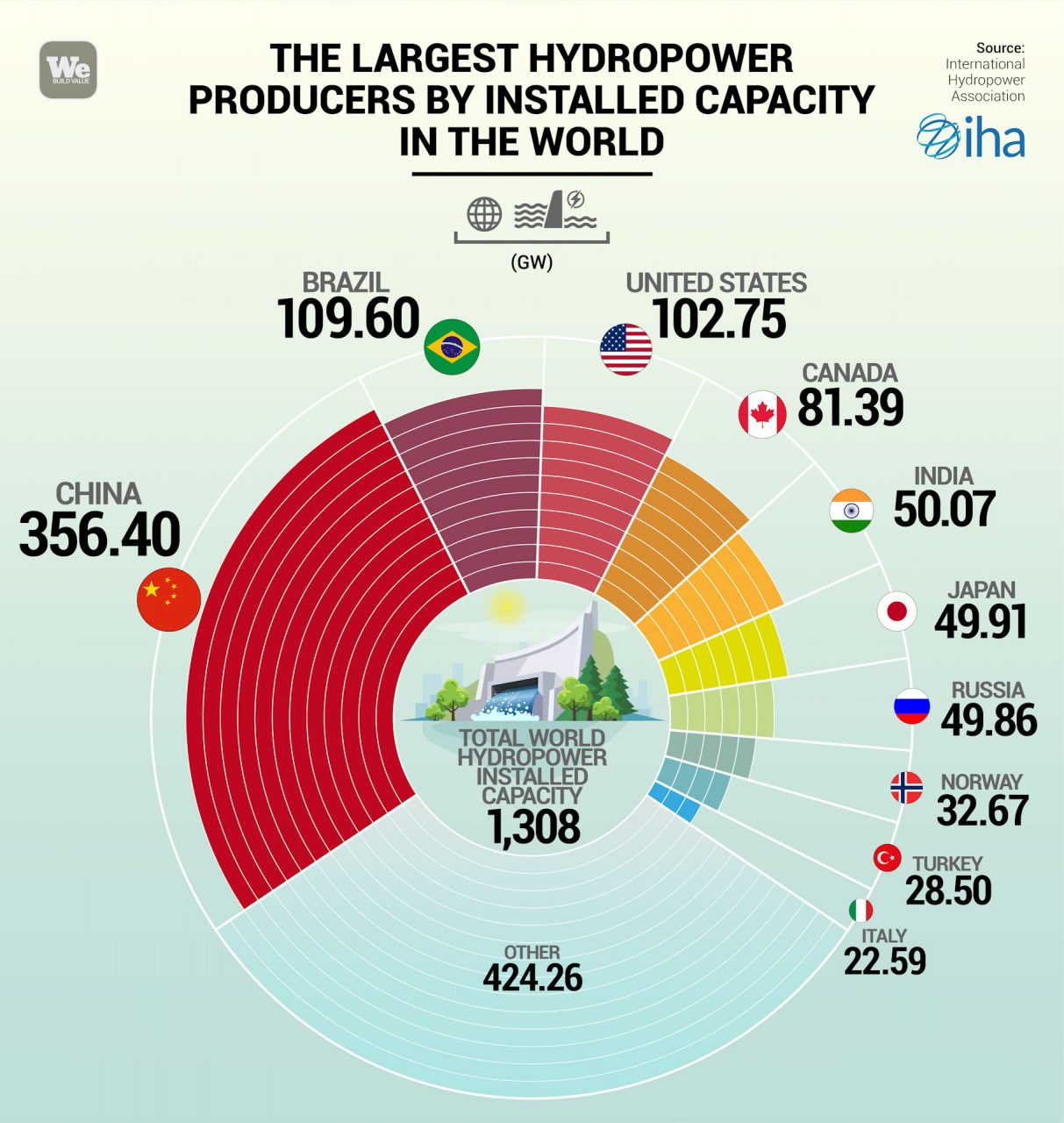 The role of hydropower in the battle against climate change

Dams, pumping plants and reservoirs are not only major infrastructure works, but also tools to fight climate change. Evidence of this has emerged from the outcomes of COP26, the UN World Conference on Climate Change held in Glasgow between October and November 2021.

According to the data that emerged at COP26, if we want to limit the global temperature rise to 1.5° C (34.7° F), by 2050 we’ll need to double the amount of energy produced by hydropower plants to 2,600 GW. The United Nations already estimates that active plants, compared to normal coal-fired power generation, help prevent the release of 4 billion tons of harmful gases into the atmosphere.

An engine for the global economy

In addition to helping to protect the planet, hydropower is also an economic powerhouse. In fact, IRENA (the International Renewable Energy Agency) calculates that 60% of the potential benefits from the installation of new plants could fall on developing countries. Investment in the sector could also help create 600,000 jobs over the next ten years, fostering development and prosperity.

To achieve this goal, however, substantial investment is needed, even in the short term. As of today, total allocations of $1.7 trillion (€1.66 trillion) are required to close the hydropower gap needed to achieve zero emissions targets. By contrast, in 2019 the global sector invested just $50 billion (€48.9 billion), half of the $100 billion (€97.8 billion) estimated at the beginning of that year.

This shows how wide the gap is that needs to be bridged for an industry that already employs 2 million people around the world and is one of the strategic levers for meeting the United Nations’ Sustainable Development Goals.

The museum of future in Dubai: a beacon of hop on tomorrow