A gold roof with a red stripe. Gold to represent the race for the conquest of riches, and red to indicate the bloody battle of December 3, 1854 during the Victoria gold rush, when the miners of Ballarat, in the Australian state of Victoria, rose up in the Battle of the Eureka Stockade to rebel against the colonial authority of the United Kingdom.

The top floors of the Eureka Tower, the famous Melbourne skyscraper named after that bloody battle, are clothed in these colors and dedicated to that chapter of Australian history. The tower has become an icon of this Australian city, both for its size as the third-tallest in Australia (standing at 297.3 metres, or 975 feet), after the Australia 108 tower in Melbourne and Q1 in Queensland), and for its special characteristics.

Designed by Fender Katsalidis Architects, when the building was completed on June 1, 2006 it ranked as the tallest residential skyscraper in the world.  This record of course has been surpassed over the years. Since then, however, the dark glass tower that looms over Melbourne has become one of the symbols of the city’s skyline, an example of a vital metropolis that is expected to grow to over 5 million inhabitants by 2030 and is now recognised worldwide as a major cultural hub. 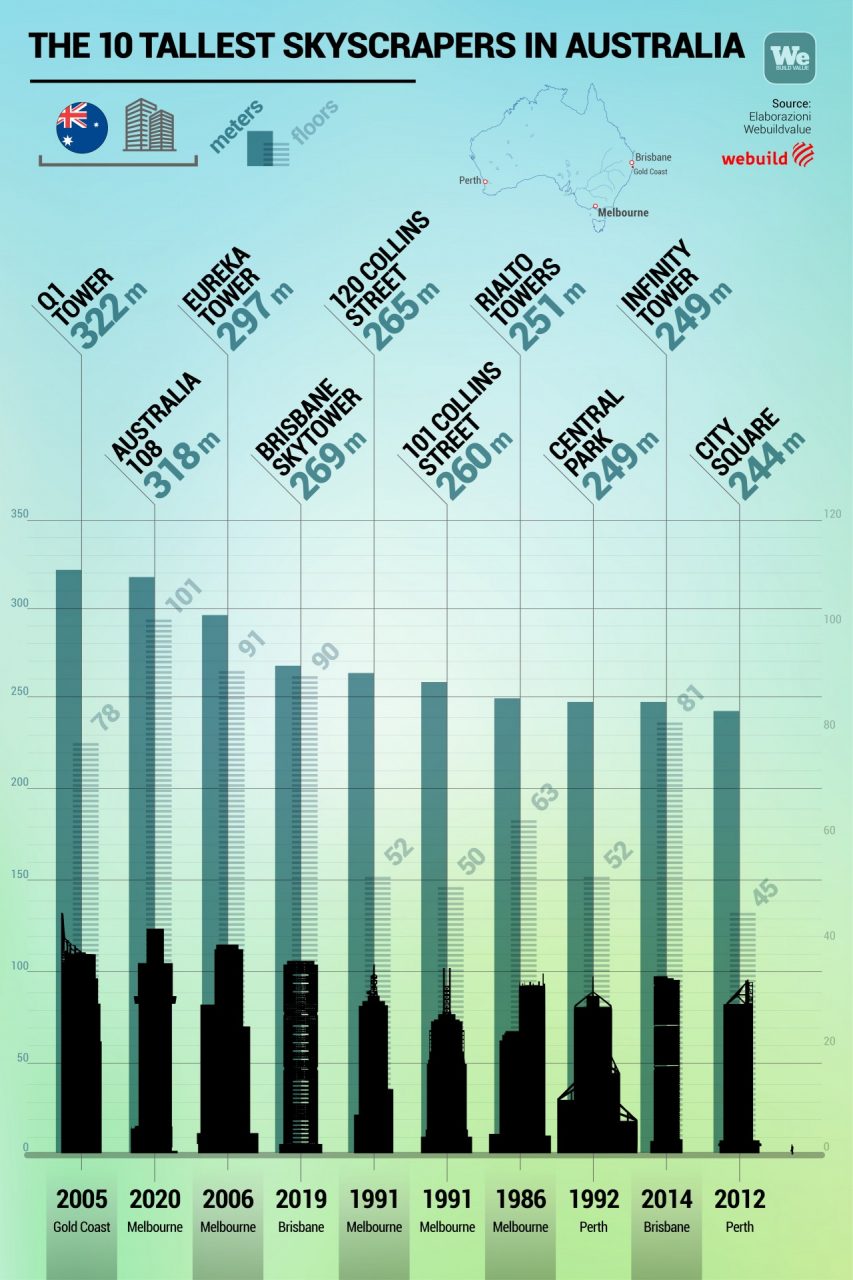 The secrets of Eureka Tower, the skyscraper that dominates Melbourne

This skyscraper that towers over the Southbank district of Melbourne is unique because it contains only apartments: it sits on a 4,900 square metre (52,724 square foot) site and was sold out by 2009 (except for the penthouse on the 85th floor).

The facade of the building consists of 52,000 square metres (560,000 sq ft) of glass and 40,000 square metres of aluminum panels. The developer carried out a special study on the thickness of the glass in order to mitigate the thermal changes in summer and winter. The double-glazing system mounted on the entire facade delivers a 40% reduction in the costs of heating and cooling.

The structure was designed to oscillate in response to the strong winds that buffet Melbourne. In fact, the tower is able to flex up to 600 millimetres (about 2.3 inches), while on the 90th floor there are huge containers holding 300,000 litres (79,285 gallons) of water just to reduce the oscillations caused by the wind.

All this makes up a giant of 200,000 tons, erected a few meters from Melbourne’s majestic Yarra River.

Melbourne, the metropolis in search of a sustainable future

The story of the Eureka Tower is the story of Melbourne, a lively cultural and economic center, which now ranks after Sydney as Australia’s second-largest city in terms of population.

The size of Greater Melbourne, including the belt surrounding the inner-city area, is now comparable to that of large international metropolises.

For this reason, the city has launched a series of projects that, in addition to encouraging building, promote internal mobility by reducing pollution and congestion. One of these is the North East Link, the project that involves the construction of twin tunnels 6.5 kilometres (4 miles) long, which, in addition to being the largest infrastructure project in Australia carried out under the PPP (public-private partnership) formula, will create the longest road tunnel in the state of Victoria.

The twin tunnels will remove 15,000 trucks on local surface roads every day, reducing travel time for commuters by 35 minutes. The design and construction of the twin tunnels has been entrusted to the SPARK consortium, of which Webuild Group is a member, with a contract worth AUD3.3 billion (€2.2 billion). The plan to build the underground highway is accompanied by a project to upgrade the surface with a roadway dedicated exclusively to buses, as well as the creation of a network of pedestrian and bicycle paths 34 kilometres (21 miles) long that will run near the Yarra River. Another modern and sustainable project to support Melbourne’s development.

Sydney is rolling out the red carpet for its new airport