Sydney is rolling out the red carpet for its new airport

Work is about to start on the M12, the freeway that will connect Sydney’s new airport with the city centre

Norway’s record-setting plan for the roads of tomorrow

In just a few months, work will begin on the M12, Sydney’s new 16-kilometer-long (10-mile) freeway, designed to give the city a fast connection to Western Sydney International Airport, the new city airport still under construction.

According to Dominic Perrottet, the Premier of New South Wales, the combination of these two strategic infrastructures will give the city a considerable boost in its ongoing modernisation process.

“Western Sydney will be home to not just a new world-class airport, but a fantastic new motorway catering to locals and visitors from all around the world, ensuring easy and quick access,” Perrottet said in early May.

The new highway is also designed to make the most of intermodal connections. In addition to the airport, the M12 will be connected with a new city road system, as well as with the future stations planned in the development of the Sydney Metro underground line.

“Our strong economic management means we can invest more in infrastructure and build the things that make a difference to people’s lives – this is how we’re delivering a better future for NSW families,” said Premier Perrottet.

The impact that the highway will have on the transport habits of Sydneysiders and travelers is truly significant, as calculated by the New South Wales government.

“We’re now just months away from this vision beginning to turn into reality,” said Natalie Ward, Metropolitan Roads Minister of New South Wales. “This new motorway will be used by up to 52,000 vehicles a day, with people saving up to 16 minutes travel time between the M7 and Western Sydney International Airport by 2026.”

The work will be important from the economic development point of view. During the construction phase, it will create 2,400 new jobs, said Ward. The sustainable infrastructure will be integrated with the surrounding environment, with the planting of 73,000 trees along the route of the highway.

The new road is not an isolated project. It is part of the Western Sydney Infrastructure Plan, an AU$4.4 billion investment plan that provides for the creation of a series of strategic infrastructures for the development of this area of the city.

M12 motorway: a project integrated with the new Sydney Metro

Both the M12 and the new Sydney airport are integrated with other infrastructure works designed to modernise the West, a strategic area of the metropolis. For this reason, in recent weeks, Sydney Metro, the public company that manages the development of the city’s metro line, recently announced the construction of two new tunnels. One is part of the Sydney Metro West project, which will connect the Greater Parramatta area with the city center, running under ground for 23 kilometres (14 miles).  The other tunnel (24 kms long) will link the Sydney city centre with the new airport through the construction of six stations, with the goal of both works being completed by 2025. 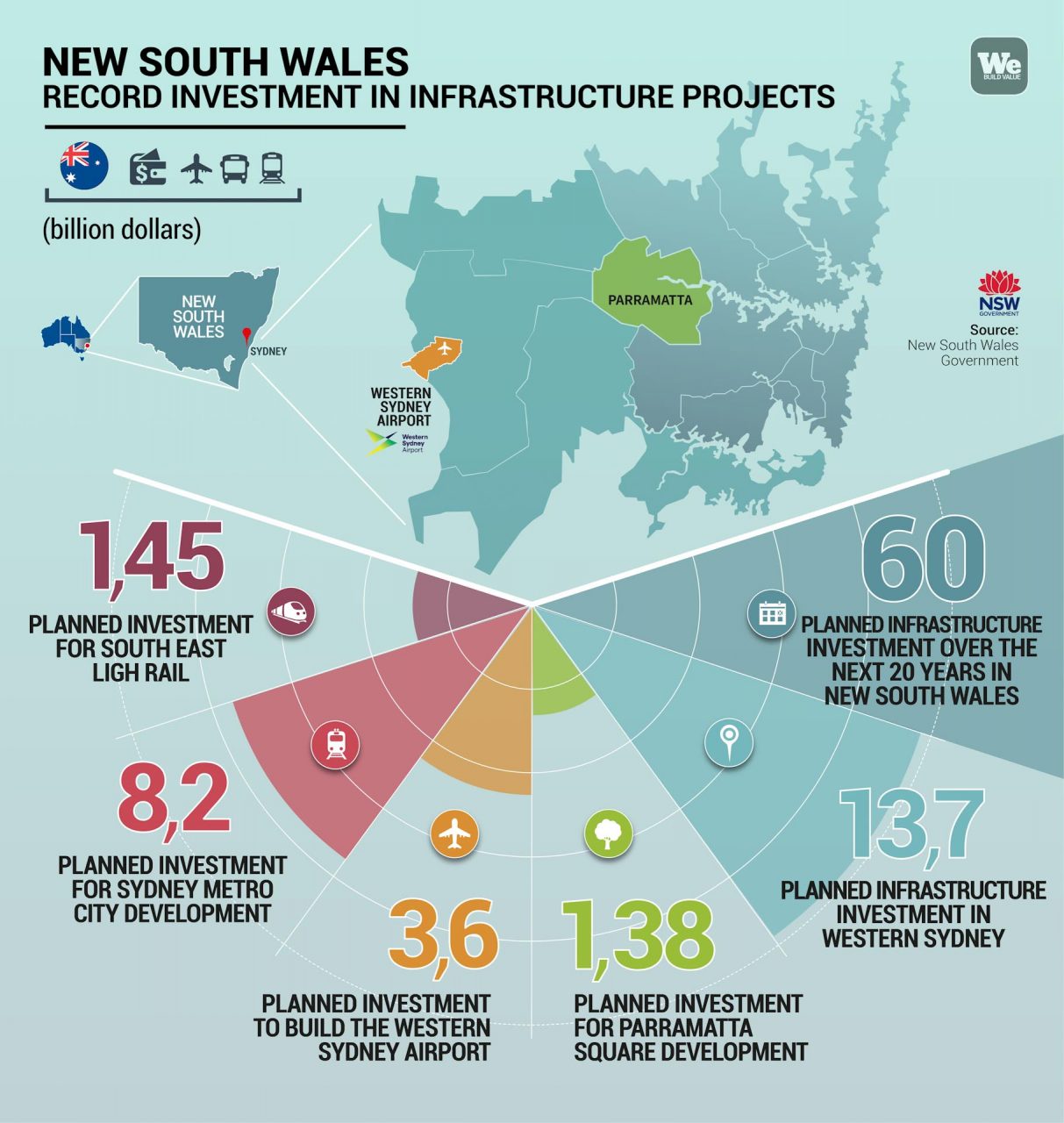 Major works to connect the airport

The primary objective of the New South Wales government is to prevent the new airport from becoming a cathedral in the desert, so it has surrounded the new airport with a series of modern infrastructures capable of connecting it with the city centre.

The plan responds to the need to develop sustainable mobility in Sydney, a project that has rail and metro links as its pillar. The North-South Rail Link connecting the Western Sydney (Nancy-Bird Walton) Airport with the city center is an integral part of this vision, and so is the Sydney Metro Northwest, completed in 2019 and built partly by Webuild Group. The network of lines will continue to develop over the next few years, extending towards the city’s south and southwest, joining the Central Business District with the Parramatta area. The ultimate goal: a rapid transit network that will reach 113 kilometres (70 miles) in length, a valuable tool for the transportation of the future in a capital that wants to become a champion in sustainable development.