Lyon-Turin, the train that unites Europe

Some people already call it “Europe’s metro line” because the Mediterranean Corridor that will connect the Iberian Peninsula with Eastern Europe, running from Algeciras to Budapest — will serve 18% of Europe’s population and will reach regions where 17% of the EU’s GDP is created.

The EU’s 350 million citizens are being linked by a network of high-speed lines already running or under construction in France, Italy, Spain and many other european countries. They are part of the TEN-T project, the European Union’s high-speed rail network. Thanks to these connections, once the line is inaugurated it will be possible to travel from Milan to Paris and from Barcelona to Turin in less than 5 hours.

As for the specific section between Lyon and Turin, the railway will cover a length of 270 kilometres (167 miles), will shift 1 million heavy vehicles per year from road to rail, achieving an annual emissions reduction of 3 million tons of carbon dioxide.

The Lyon-Turin section is designed to transport 40 million tons of goods and 5 million passengers each year.

Currently, 3 million heavy vehicles cross the French-Italian Alps every year and half of them pass through the Italian city of Ventimiglia. Hence the importance of completing this strategic railway, capable of becoming a sustainable and high-tech business transport corridor for goods and passengers.

The project is more than “just” strategic. It is complex in engineering terms, especially in the construction of the Mont Cenis Base Tunnel, the world’s longest tunnel at 57.5 kilometres (35.7 miles) long which, 150 years after the inauguration of the Frejus tunnel, transforms a mountain line and brings it up to European standards.

Inside the tunnel, which will connect Italy’s Susa Valley with France’s St. Jean-de-Maurienne, passenger trains will run at a speed of 220 km/h (136 mph), technically not fast enough to be called “high speed” on this portion, while freight trains will reach 110 km/h (68 mph).

Once completed in an estimated 10 years’ time, the work will have a significant impact on Italy and its Piedmont region. In fact, the high-speed rail project aims to fuel trade between Italy and France, enhance rail freight exchange around the city of Turin, as well as contribute to the development of metropolitan transport in the city itself.

The tender won by Webuild

A total of 23 kilometres of a bi-tube will connect the cities of Saint-Martin-de-la-Porte and Praz in France. This is the core of Lot 2 of the Lyon-Turin that TELT (Tunnel Euralpin Lyon Turin) has awarded to an international consortium including Webuild Group and Vinci Construction (VINCI Construction Grands Projets, leader, VINCI Construction France and Dodin Campenon Bernard). 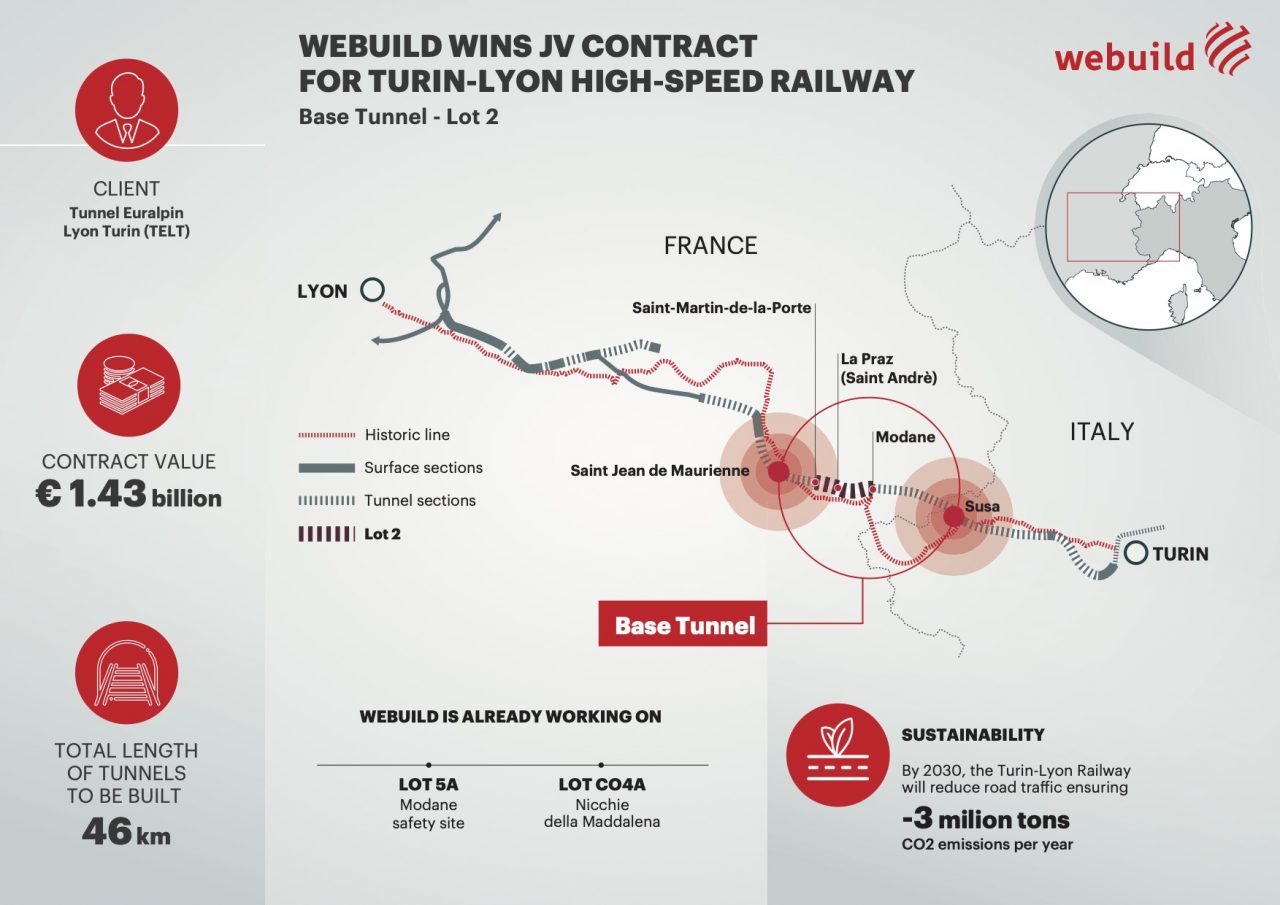 The €1.43 billion ($1.68 billion) contract includes excavation works, carried out partly by traditional methods and partly by the Tunnel-Boring Machine (TBM), for the construction of the two parallel tunnels along which the high-speed trains will run.

As demonstrated by its contract to build the first high-speed train in the United States connecting Dallas to Houston, Webuild has attained a high level of recognized expertise in sustainable mobility. The company has built 13,637 kilometres (8,473 miles) of railways and subways worldwide, and is currently working on several high-speed construction sites in Italy. These projects are all considered strategic not only for the countries they reach, but for the connectedness of entire European continent.

A priority project for the European Union

It was in 1994 that the European heads of state decided that the Lyon-Turin railway was a priority project for the continent, and France and Italy agreed to work together for its construction.

The work is progressing now with 7 active worksite and the perspective to complete the base tunnel in the deadline shared with European Union and the two nazional Governments.

Crossing the Alps without polluting

The construction of the Mont Cenis base tunnel and more generally of the Lyon-Turin line solves a problem that has existed for over 1,000 years. Since the time of Hannibal, crossing the Alps meant challenging nature. One hundred and fifty years ago, the first tunnels were dug by the French, Italians and Swiss, which have evolved over time until the recent construction of the “base tunnels” where the high-speed railway will run. This is the purpose of the Lötschberg and Gotthard tunnels in Switzerland, as well as the Brenner (currently under construction with the contribution of Webuild Group) and, in the future, the Turin-Lyon tunnels.

The transition from road to rail also responds to a need recognised by the European Union in the post-Covid Next Generation EU economic recovery program. The aim is to shift long distance freight transport from road to rail by providing incentives. The new line will reduce harmful carbon emissions, accidents, as well as water and soil pollution, delivering an annual savings of €500 million. Just one of the many benefits for Europe’s population once this impressive project is finished.

Perth, sustainability at the service of infrastructure