After Europe, Japan and China, a train service in Texas could bring the United States into the sector

In America, a race toward $80 billion (€66.8 billion) in funding for trains is underway

The railway network in the United States is the most extensive in the world. At 225,000 kilometres (140,000 miles), it provides crucial support to the economy, with a third of the country’s exports riding on its tracks. Passenger rail serves tens of millions of people a year. With a frequency of 300 trains a day, it takes them to more than 500 destinations. But the network, operated in large part by Amtrak, is also the slowest. Its Acela Express, which runs along the Northeast Corridor from Washington, D.C. to Boston, does 16 stops and reaches a speed of 240 kilometres per hour only for a 34-mile section of the 457 total. That makes the average travel speed at 105 kilometres an hour. So the country still has a lot to go in order to offer a genuine high-speed service.

But it might not be too far away in light of the latest signing of a contract ahead of the start of the construction of a dedicated railway between private company Texas Central and the Webuild Group and its U.S. subsidiary, Lane. At a length of 380 kilometres (240 miles), the Dallas-Houston line would bring the first genuine high-speed service to the country, with trains capable of speeds of 200 miles per hour (320 kilometres per hour).

US high speed rail enter a market dominated by China

The arrival of the Texas High-Speed Rail would lead to the country’s entrance into a sector that has so far been dominated by Asian countries, China in particular. However, a number of high-speed rail projects have been proposed across the United States in the past five years. There is the one in California between San Francisco and Los Angeles, another between Nevada and California, and a third in Florida between Tampa and Orlando. There is also a cross-border proposal called Cascadia between Seattle and Vancouver, Canada. These projects have either remained on the drawing board, been converted into regular railway service, or had their construction suspended due to delays and cost overruns, such as the one in California. In that case, construction on a 119-mile section between Merced and Bakersfield in Central Valley has been allowed to proceed. 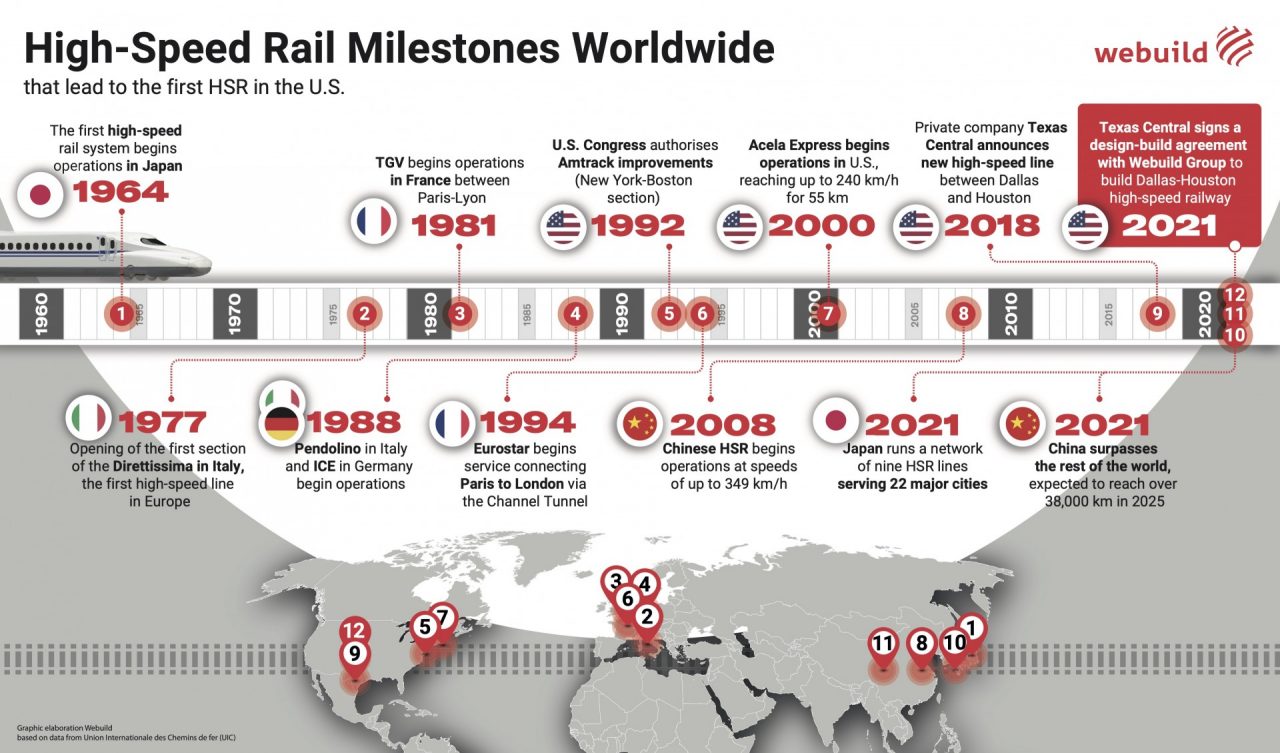 Before the Texas project came into being, the United States did not figure on the global map of high-speed rail. So the Dallas-Houston line has all the credentials to help put the country on the map. More than 50 years ago, the United States began building a transport network that favoured the car over the train with the 1956 signing of legislation by President Dwight Eisenhower to create 41,000 miles (66,000 kilometres) of the Interstate Highway System.

Japan and Europe, the race for sustainable mobility

In Japan, meanwhile, the country was preparing for the launch of an avantgarde railway system: the Shinkansen, best known as the bullet train. In 1964, it was running between Tokyo and Osaka. It was a proud moment for the country as it hosted the Olympic Games. Today, Japan has a network of nine high-speed rail lines that serve 22 cities across its three main islands. It has more than three other lines under development. It has the busiest high-speed rail system in the world, with more than 420,000 passengers a day. Its trains travel up to 320 kilometres an hour (200 miles an hour). Service is extremely punctual and absolutely safe: in more than 50 years of service, it has transported more than nine billion people without suffering a single accident.

Nearly two decades later, France in 1981 put into service its first high-speed train between Paris and Lyon, capable of speeds of up to 200 kilometres an hour. A decade later, other European countries have built their own high-speed lines. Germany, Spain and Italy – where Webuild has built a big part of the country’s network – are still among the top ranks for kilometres of dedicated lines and speed of trains. In 1994, there was the Eurostar, which travels between Paris and London via a tunnel under the Channel

The Chinese record for high-speed rails

Then China entered the segment with its first projects in 2000. In 2008, the first train started between Beijing e Tianjin and, 15 years later, it has grown along with the economy with links to the main cities. China has surpassed the rest of the world with a network of 27,000 kilometres of high-speed rail with trains based on the Shinkansen model that are able to exceed 350 kilometres per hour in speed. The country aims to have its network cover 38,000 kilometres by 2025 and 45,000 in the medium term. The government wants to breach long distances between production areas and promote transport by rail because it is safer and more sustainable in light of its inferior energy consumption.

In the United States, meanwhile, the debate over the benefits of car, air and train travel have seen little private and public investment go to rail. A lower population density in urban areas compared with that seen in Asia and Europe, stronger property rights, and a deep car culture are some of the reasons for which high-speed rail has yet to be considered.

But President Joe Biden and his transport secretary, Pete Buttigieg, have show an interest in rail, even venturing to speak favourably of high-speed service. “When it comes to rail, why should Texas be inferior to China?” Buttigieg was quoted by the local press as saying in March.

The bullet train between Dallas and Houston will have Japanese technology with a new version of the Shinkansen – the N700S – designed for the project. The trains will complete the journey in less than 90 minutes, an hour less than travelling by air and at least 90 minutes less than by car. Webuild will build the infrastructure together with its U.S. subsidiary Lane, whose combined experience adds up to more than a century in transport engineering with more than 10,000 kilometres of built rail and metro lines, including high-speed in Italy.