Secrets of Warragamba Dam, the infrastructure that protects Sydney from drought

World Water Day, water will save the world

An ancient Aboriginal legend tells the story of two spirits: Mirragan, a large tiger, and Gurangatch, a never-before-seen creature, half reptile and half fish, who lived in the lagoon, born from the meeting of the Wollondilly and Wingecarribee rivers. This same lagoon eventually became completely submerged with the construction of Warragamba Dam.

Perhaps it is because of this legend of Mirragan and Gurangatch, or perhaps because the dam — located 65 kilometres (40 miles) west of Sydney — provides water for the over 5 million people living in the metropolis, but the Warragamba Dam has always been a symbol for Australia: an example of how infrastructure can best serve people, as well as integrate seamlessly with its surroundings.

The size of the whole facility is considerable: the dam is 142 metres (466 feet) high and 351 metres long (1,152 feet), the artificial lake created by the dam covers 75 square kilometres (29 square miles), making it four times larger than Sydney Harbour. These features are precisely the reason why Warragamba Dam is now one of the world’s largest city-based hydroelectric plants. 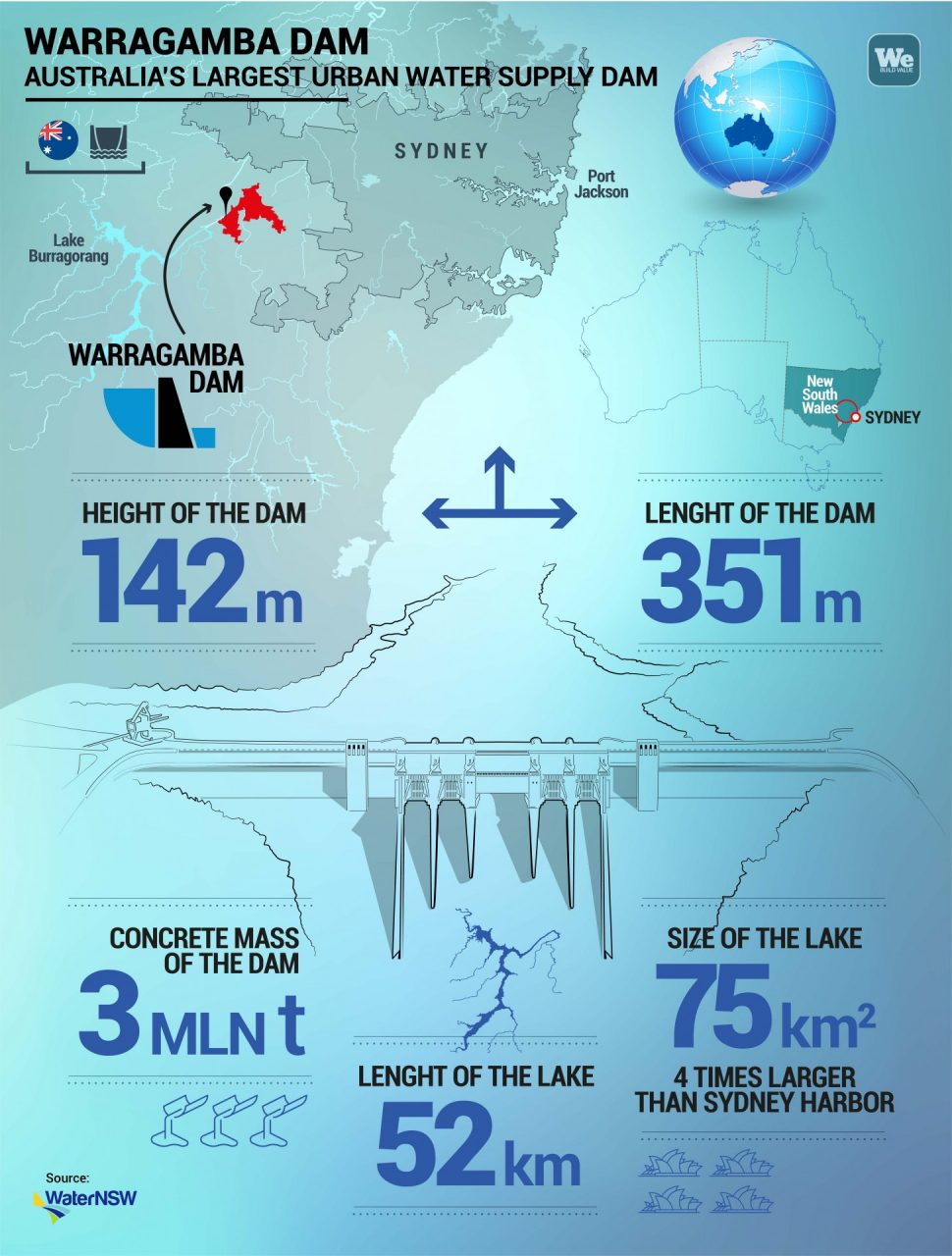 Warragamba Dam: a story that begins in the 19th century

In 1845, Count Paul Strzelecki, while exploring the valley around the Warragamba River, took note of this very gorge as an ideal place to build a dam. The explorer’s ingenuity comes through in his Australian travel accounts, which are often driven by the idea of creating a facility that could make the most of the remarkable possibilities afforded by the rivers washing over these lands. In fact, the first plans to build a dam in that area date back to 1867. But in subsequent years, other territories were favored until the late 1920s, when Australia was hit first by the Great Depression and later by World War II.

The Polish explorer’s visions would only come to fruition about a century later, in 1948, when construction on the dam finally began. It had become essential by then, not only because of Sydney’s growing population, but also due to the onset of very long seasons of drought. Between 1934 and 1942, Sydney experienced the worst droughts in its history, creating an enormous burden on its citizens, which eventually led the authorities to start construction.

The dam construction became a challenge within a challenge, as it took 12 years to complete the project and 1,800 people constantly at work on the construction sites. The Warragamba Dam did not open, in fact, until 1960. Soon after its opening, it became a strategic tool for the city of Sydney and its residents, a real drinking water reservoir for one of Australia’s largest cities.

Warragamba Dam, the engineering challenge of the 20th century

The construction of the Warragamba Dam is considered by many to be one of the greatest engineering feats of the 20th century. To achieve this great accomplishment, first, the river’s course had to be diverted. Additionally, two small temporary dams and a tunnel needed to be built to keep the land dry. To complete these works, 2.3 million tons of sandstone were removed, while the concrete was made on site with a mix of 305,000 tons of cement and 2.5 million tons of sand and gravel.

To enable workers to travel to the construction site, two suspension bridges were built connecting the village of Warragamba with the work areas. At the end of the project, one of the two bridges was demolished while the second remained standing until 2001, when a series of damages forced the authority controlling the dam to demolish it.

Work and improvements on the dam continued even after its completion in 1960. Early modernisation efforts were carried out in the late 1980s and again in the early 2000s, when the dam itself was secured again to prevent possible damage caused by the flooding of the river. Finally, in 2006, a pumping plant was also built, which now allows water to be collected during the river’s driest times.

Major works to fight drought and for better water management

The Warragamba Emergency Scheme, the initial name of the project that led to the construction of the dam, perfectly captures the intent. Indeed, the work emerged as a response to stabilise an emergency that broke out during World War II and carried on throughout the late 1940s: the city of Sydney was affected by repeating droughts, and the authorities needed to ensure a water supply for its citizens. The Warragamba Dam was born, and Australia has continued in recent years to invest in hydropower projects designed to make the most of its water resources. This is also the reason behind Snowy 2.0, the vast water pumping and power generation plant that the Webuild Group is constructing in the Snowy Mountains. In addition to efficiently managing water, the plant will increase the power generation capacity of the old plant by 2,000 megawatts, going so far as to triple the water pumping capacity of the entire system.  This is a revolution for the hydropower sector, which already contributes 33.9% of Australia’s total renewable energy production.

Goodbye to the Gerald Desmond: Long Beach’s old bridge is being demolished