The United States invests $50 billion in cleaning up its water

Fifty years since the Clean Water Act of 1972 was introduced in the United States – the first federal law addressing the topic – individual states are again being called to take action to protect their water sources. The federal government has allocated more than $50 billion (€44.2 billion) in funding over the next five years to repair, build, or rebuild infrastructure for drinking water, wastewater and storm water. This is the most significant investment in this sector to date, and is part of the $1 trillion (€884.4 billion) bipartisan bill to redesign national infrastructure, recently passed by Congress. 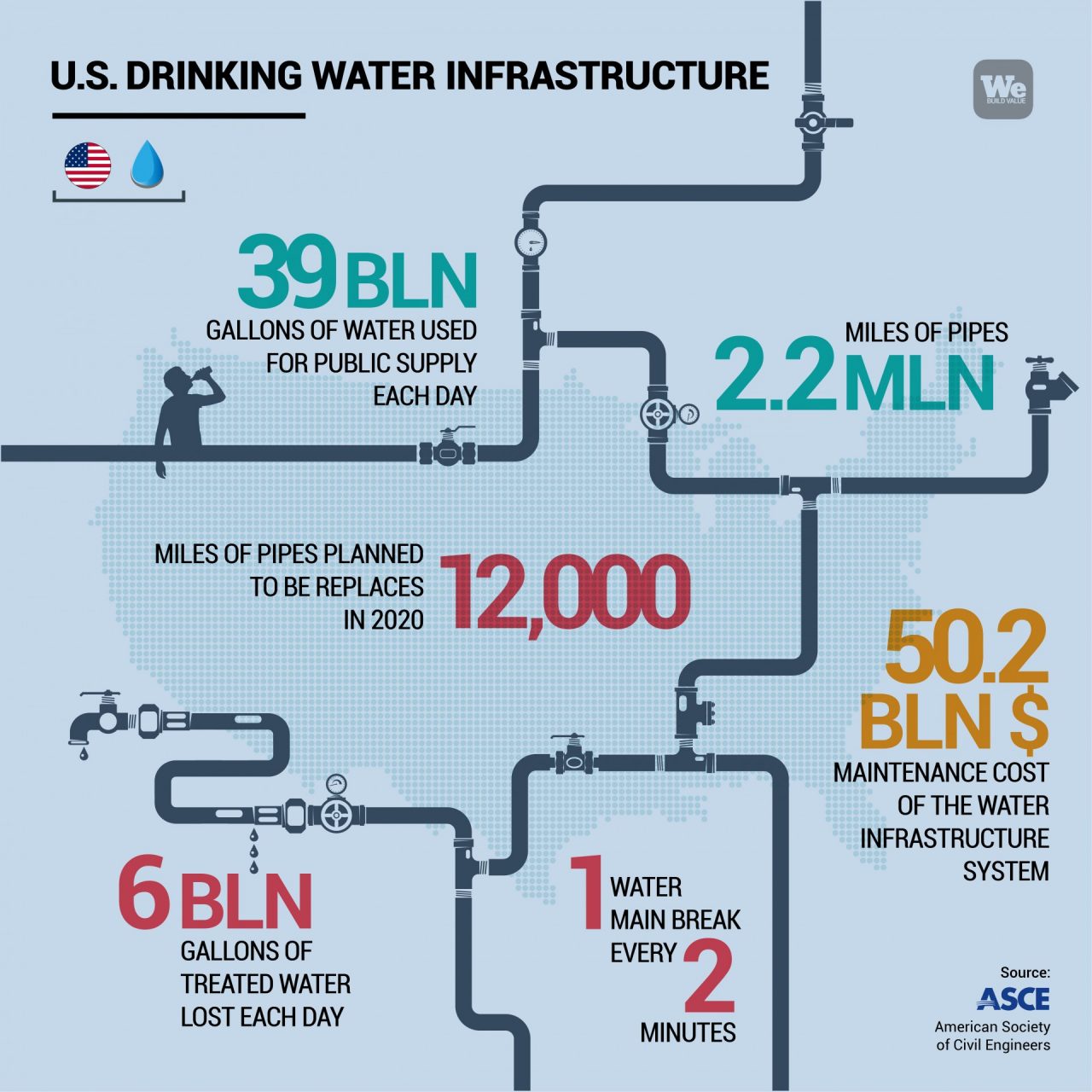 From the Chesapeake Bay to the Great Lakes of the North, to Puget Sound in Washington State, the basic idea of the water infrastructure revamp is to better protect the nation’s resources and ensure that they continue to perform their vital economic and recreational functions. The remainder of the funds will be provided by EPA to clean up super-polluted areas, revitalise blighted sites and brownfields, and to modernise inefficient waste management and recycling facilities.

In early December, the EPA announced that 39 new projects nationwide have been invited to apply for loans under the Water Infrastructure Finance and Innovation Act (WIFIA). Invited projects include seven communities in Idaho, Oregon and Washington. The EPA anticipates that once funds are available, $6.7 billion (€5.9 billion) in WIFIA loans will help fund more than $15 billion (€13.3 billion) in water infrastructure projects to protect public health and water quality in 24 states.

According to the American Society of Civil Engineers (ASCE), the organisation overseeing the state of infrastructure maintenance across the country, and a key player in outlining the Biden plan-turned-law, the U.S. drinking water network consists of 2.2 million miles (3.5 million kilometers) of underground pipes. Due to decades of under-investment, the system is outdated, with a and about 6 billion gallons of treated water (22 billion liters) lost every day.

The demand for clean water is expanding on a grand scale, affecting large metropolises that need to replace old pipes and reject lead use. As Congress was passing the infrastructure bill, the city of Newark, New Jersey, home to a key international airport, informed media that it has nearly completed an overhaul of its entire water network. That process began in 2019 in response to a class action lawsuit addressing the lack of effective lead level control.

Drinking water: an asset worth protecting

According to ASCE estimates, 82 gallons of water (310 liters) are used per person per day in the United States. Approximately 80% of national drinking water comes from surface waters (rivers, lakes, reservoirs and oceans), and the remaining 20% from groundwater. Approximately 155,000 public drinking water systems are active across the country.

In California, where the Porter-Cologne Water Quality Act of 1969 created a national model for regulating watershed protection, significant work has been done in recent decades to improve some of the most polluted streams and reclaim wastewater in the San Francisco Bay. Numerous other requalification projects are still underway or are being launched.

According to a Los Angeles Times op-ed, however, California’s most populous city may not meet its water quality goals until 2082, some 60 years behind schedule. The op-ed, which cited data from the State Water Board, indicates that 93% of the state’s lakes and coastal areas have compromised water quality levels, as do 99% of wetlands, bays and estuaries, carrying consequences for public health and beach use, and posing threats to fish and wildlife.

Complicating the situation and delaying states’ eagerness to put new federal funds to use is the ongoing Covid-19 pandemic – in particular, the difficulty both public and private organisations face in deploying adequate human resources.

Gradually, states will be able to greenlight projects that have been on standby, beginning the process of drawing up contractor agreements. Experience and proven efficiency in the water sector are expected to prevail when these choices are being made. Constructors like Webuild, a sector leader for over five years, are being called on to play a decisive role in the challenge.

Webuild, with its subsidiary Lane Construction, is already active in several U.S. projects, spanning environmental recovery infrastructure, urban wastewater management, improvement of existing structures to build more resilience against (increasingly frequent) extreme weather, protection from flooding, and prevention of water body pollution. Among the most important engineering works the group has carried out is the hydraulic tunnel at the center of Lake Mead, designed to supply Las Vegas with drinking water and restore the flow of the Colorado River to an acceptable level.

Like other American cities, frequently built according to the same model, Washington, D.C. has suffered from its outdated, highly clogged sewer system, where frequent rains and untreated water have proven to be a toxic combination. As part of the Clean Rivers Project, set to be completed in 2025, Webuild has fashioned a futuristic hydraulic tunnel under the Anacostia River, a tributary of the Potomac, which allows wastewater to be conveyed separately from rainwater, helping to de-pollute the city.

Webuild and Lane’s accomplishments and ongoing work are found in varied corners of the country: there’s the Dugway Storage Tunnel in Ohio to reduce environmental sewage discharges and storage of treated water; the Kuwahee Water Treatment Plant to regulate sanitary sewer flows in the Tennessee River; the Ship Canal Water Quality Project to manage Seattle’s wastewater and storm water; the Three Rivers Protection & Overflow Reduction Tunnel to restore rivers and the city of Fort Wayne, Indiana; the West Side CSO Tunnel Project to improve the water in Portland, Oregon; and the C43 Caloosahatchee Project in South Florida to restore natural water flows after residential and agricultural development in the area around the unique Everglades ecosystem.

The U.S. government has allocated $50 billion (€44.2 billion) in funding for water infrastructure over the next five years

Every two minutes, the U.S. water supply experiences an outage; about 6 billion gallons of treated water (22 billion liters) are lost every day

Webuild has built a futuristic hydraulic tunnel under the Anacostia River, a tributary of the Potomac