The Los Angeles City Council approved plans for the energy transition of the metropolis.

Los Angeles votes to change its future. The Los Angeles City Council recently unanimously approved a plan (12 in favor and 0 against) to have municipal utility Department of Water and Power transition to 100% by clean energy by 2035. The goal is to shorten the time, accelerate the race towards sustainability, and win the daily battle that America’s second-largest city and the state of California are fighting against the adverse effects of climate change.

The decision is in line with the national targets presented by President Joe Biden, and moves the goal forward by 10 years compared to the original plans. To achieve this, the City Council approved LA100, a complex road map for the energy transition focusing on solar, wind, hydro, energy conservation, as well as on investment in the modernisation of energy transmission networks.

The plan aims to transform one of the world’s most congested and vibrant cities into a sustainable paradise, where new energy supply systems will become an opportunity to promote innovative development models.

California's chance to mitigate the effects of climate change

The Los Angeles City Council’s choice comes at the end of another tough summer for California, once again pummeled by fires and devastated by drought, and a few weeks after the publication of a report by United Nations Intergovernmental Panel on Climate Change calling the state of climate change “a code red for humanity.”

“LA100 is not a utopin gesture. It is a work plan for a world in trouble,” said City Council member Mitch O’Farrell, one of the consellors who presented the measures, after the vote.

The National Renewable Energy Laboratory (NREL) presented a report last March — commissioned by the Los Angeles municipal administration — in which it calculates that the city is able to achieve 98% clean energy within the next 10 years and 100% by 2035. 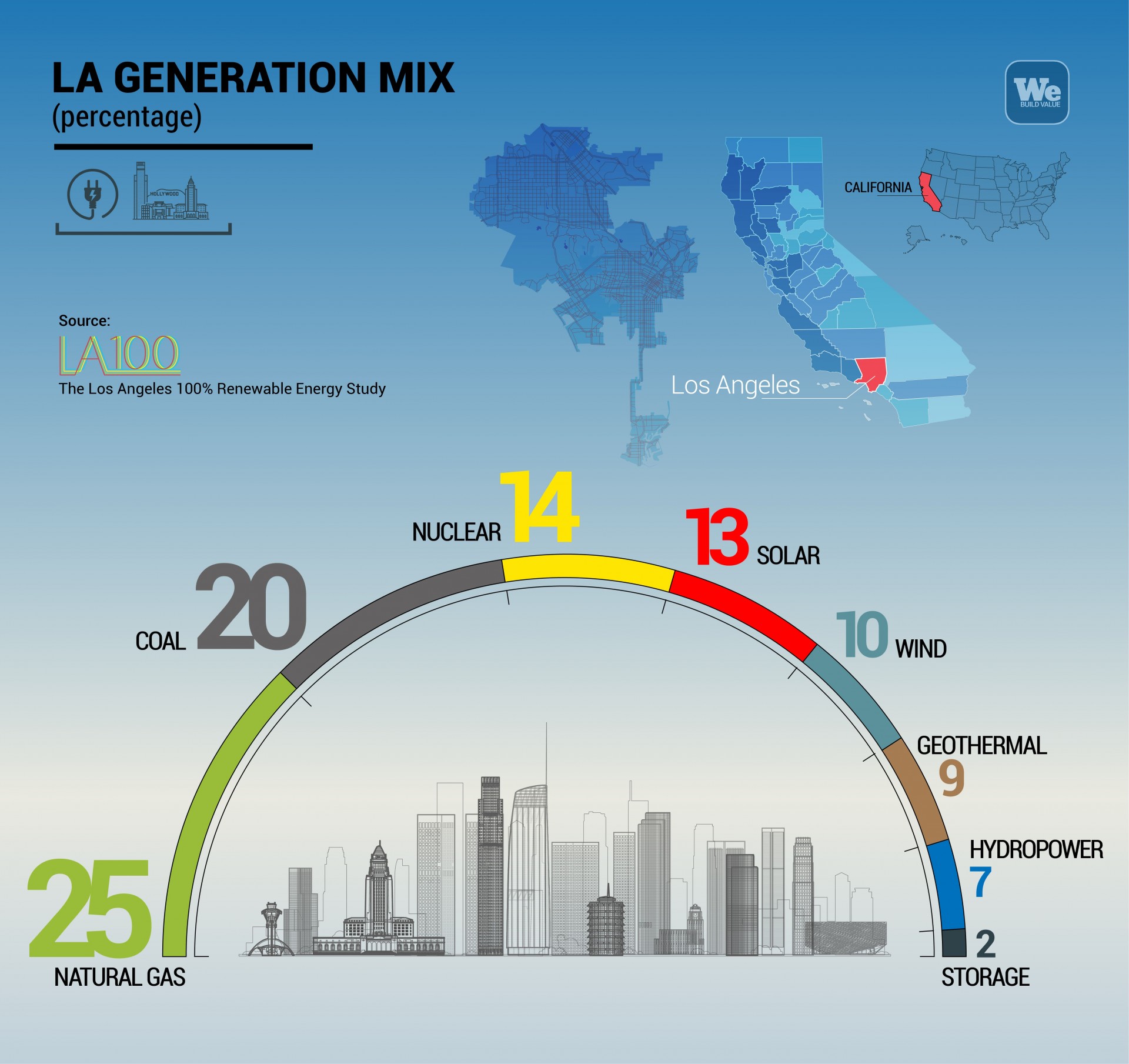 According to the report, the economic impact would be “small” or “negligible” in relation to the total 3.9 million workers and $200 billion of wealth produced each year, while the beneficial effects on workers and the environment would be considerable.

Jobs, development, and health go hand in hand. The first direct benefit that Los Angeles residents will derive from the city’s energy transformation will be the improvement of physical well-being. According to the analysis collected in the NREL report, in 2045 the annual savings from cost reduction related to health, including air quality, will reach $1.4 billion.

The plan can only be sustained through substantial investments. The National Renewable Energy Laboratory report estimates that the cost to the city could range between $57-$87 billion. That’s a hefty figure when you consider that within the $1 trillion infrastructure plan discussed in Congress, energy transition investments for the entire United States stop at $73 billion.

The city therefore needs funds, which will come in part from the state government and in part also from private investors. Once raised, the funds will have to be invested in thousands of projects, many of which involve the modernisation of large existing plants. Leading the list will be the Intermountain Power Plant, which today provides one-fifth of the city’s energy needs.

A new workforce to deliver the plan

Investments and technology are not the only things needed to carry out the plan. Manpower will also be key. Job creation will be one of the most significant consequences of the Los Angeles energy transition. The City Council says that the energy transition is expected to create 9,500 jobs, occupations that will last beyond construction, remaining in place afterwards to cover the workforce needs of the city’s new energy system.

In this regard, the Los Angeles Department of Water and Power (LADWP, the largest municipal energy utility in the United States) has been instructed by the City Council to establish a long-term plan to select new personnel from the city’s most economically disadvantaged neighborhoods, thus promoting the growth of areas that are today particularly affected by poverty and marked by the lack of concrete and lasting opportunities for development.