Around 125,000 vehicles can cross the historic bridge each day, the symbol of the Australian metropolis

From the past to the present, the history of Sydney’s development goes hand in hand with its infrastructure. Bridges, roads, subway lines, ports, and airports have all contributed to making the Australian metropolis and capital of New South Wales one of the most modern and livable cities in the world.

The inhabitants of Sydney have long been accustomed to marking dates of new beginnings on their calendars linked to the inauguration of large infrastructures. One of these dates is December 3, 1995 when the Anzac Bridge was opened, one of the city’s iconic works, especially for the impact it had on the road system. The bridge makes it possible to quickly connect the city center with the far west side of the metropolis. Even today, after almost twenty years since the first cars crossed it, using the bridge is one of the main city routes from East to West – one accessible to all because there is no toll to cross it. The capital of New South Wales has become the metropolis it is today also thanks to the bridge: the largest Australian city with more than 5 million inhabitants, contributing one third of Australia’s GDP and achieving an average annual growth of 2.5% in the number of jobs created.

The characteristics of Ancac Bridge, an iconic work

In addition to being a highly functional infrastructure, the Anzac Bridge is also one of the first works of great visual impact built in Sydney. The bridge is 805 metres (2,641 feet) long in total, has a 345-meter (1,132 foot) long central span, and is supported by two 120-metre high towers and 128 cables.

In fact, the Anzac was not the first bridge to cross the sea in Sydney. Before it, the same task was entrusted to the Glebe Island Bridge, a smaller steel bridge with a highly reduced span that was opened in 1903.

Work on the Anzac bridge was completed on July 24, 1995, but a few months were needed for testing the materials used in its construction in all weather conditions before it could be officially opened.  It was inaugurated on December 3, 1995, the then-Premier of New South Wales Bob Carr, along with the Mayor of Sydney. The event was attended by 65,000 people who paid a ticket to be the first to walk on the bridge, while the proceeds were donated to the Smith Family, an association committed to supporting families affected by economic and financial crisis. From day one, the bridge made a contribution to Sydney’s economy and development, as did all the other great works of a city in perpetual movement. 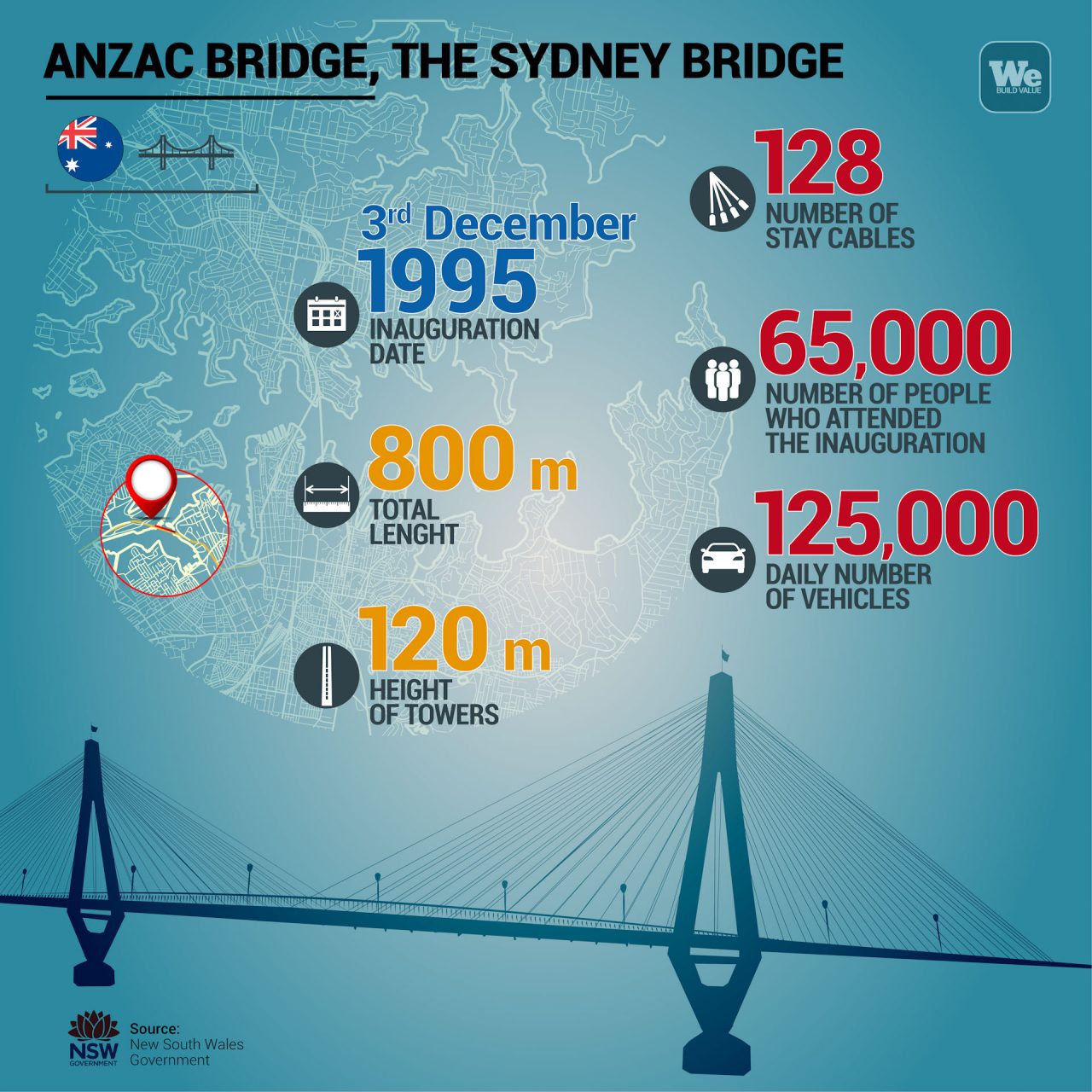 The evolution of a work in the moving city

The history of the Anzac Bridge does not end with its inauguration. The current name was given to the bridge only on November 11, 1998 by Premier Bob Carr (the first name was Glebe Island Bridge), who decided to call it Anzac on the 80th anniversary of Armistice Day and to remember the fallen in World War I of the Australian New Zealand Army Corps (ANZAC).

Since then, it is as if the bridge has grown with Sydney. It can carry a maximum of 125,000 vehicles each day, and average traffic is 125,000 vehicles, confirming its value as a strategic artery for the metropolis. Today the western area of the city, which is connected by the bridge to the Central Business District, is undergoing a major urban renewal and infrastructure development programme.

At the beginning of 2021, the government of New South Wales announced an investment of UA$4.4 billion Australian (US$3.1 billion) over the next ten years, called the Western Sydney Infrastructure Plan. It aims to respond to the city’s population growth by building new infrastructure.

Among the various projects is the construction of the Northern Road highway, as well as the completion of the M12 Motorway, Overall, the Western Sydney Infrastructure Plan is expected to create a total of 4,000 jobs over the life of the plan, the NSW government said. The final goal is to arrive in 2026 ready for the inauguration of the Western Sydney International Airport, a new facility designed to serve the western area of the metropolis. Yet another strategic infrastructure with a location that depends on the Anzac Bridge, the historic link connecting the West with the city center.