Perth, sustainability at the service of infrastructure

Perth, the capital of Western Australia, one of Australia‘s liveliest and most innovative metropolises, is also home to one of the country’s most popular infrastructures: the Optus Stadium, the country’s third-largest, that won the Prix Versailles World Architecture Design Award in 2019 for being the world’s most beautiful sports facility.

Work began on the stadium in December 2014. As soon as it was completed it immediately earned a place of honor in the Perth skyline because of its innovative design, and sinuous forms that fit perfectly with the surrounding environment. It also stands out for its respect for the most sophisticated criteria of environmental protection, both in the use of materials and energy consumption. Optus Stadium has become a pearl that enriches the skyline of the Perth Central Business District, which can be admired from the structure’s location on the Burswood peninsula. From its stands, spectators can gaze across to the Swan River which cuts through the city, and enjoy the view of Perth’s downtown buildings. But its beauty and functionality are not limited to the structure itself: a huge public park surrounds the stadium, where playgrounds for children alternate with areas set up for events and artistic activities, picnics, and barbecues. There are restaurants where you can eat outdoors enjoying the view of the green surroundings. At the center of the park is the large structure, which has become a reference point for anyone who loves sports.

Winning the World Architecture and Design Award is no accident. Optus Stadium achieved it by integrating the structural requirements of a large sports arena with the criteria of design and sustainability. The structure can accommodate 60,000 seated people, but its functions are not limited to sporting events. The characteristics of the stadium make it perfect also for concerts, large events, and cultural events. Spectators are put first, with two massive screens at either end unique in the world for size, each of which is 340 square meters (3,700 square feet), in addition to over 1,000 TV screens located inside the stadium and designed to allow spectators to follow the events at their best.

Security is also a very high priority. The stadium has 650 CCTV cameras, coordinated by a police station inside the stadium. As for entertainment, Optus Stadium is designed for convenience and enjoyment. No matter where you are, the farthest bar is never more than 40 metres (130 feet) away. 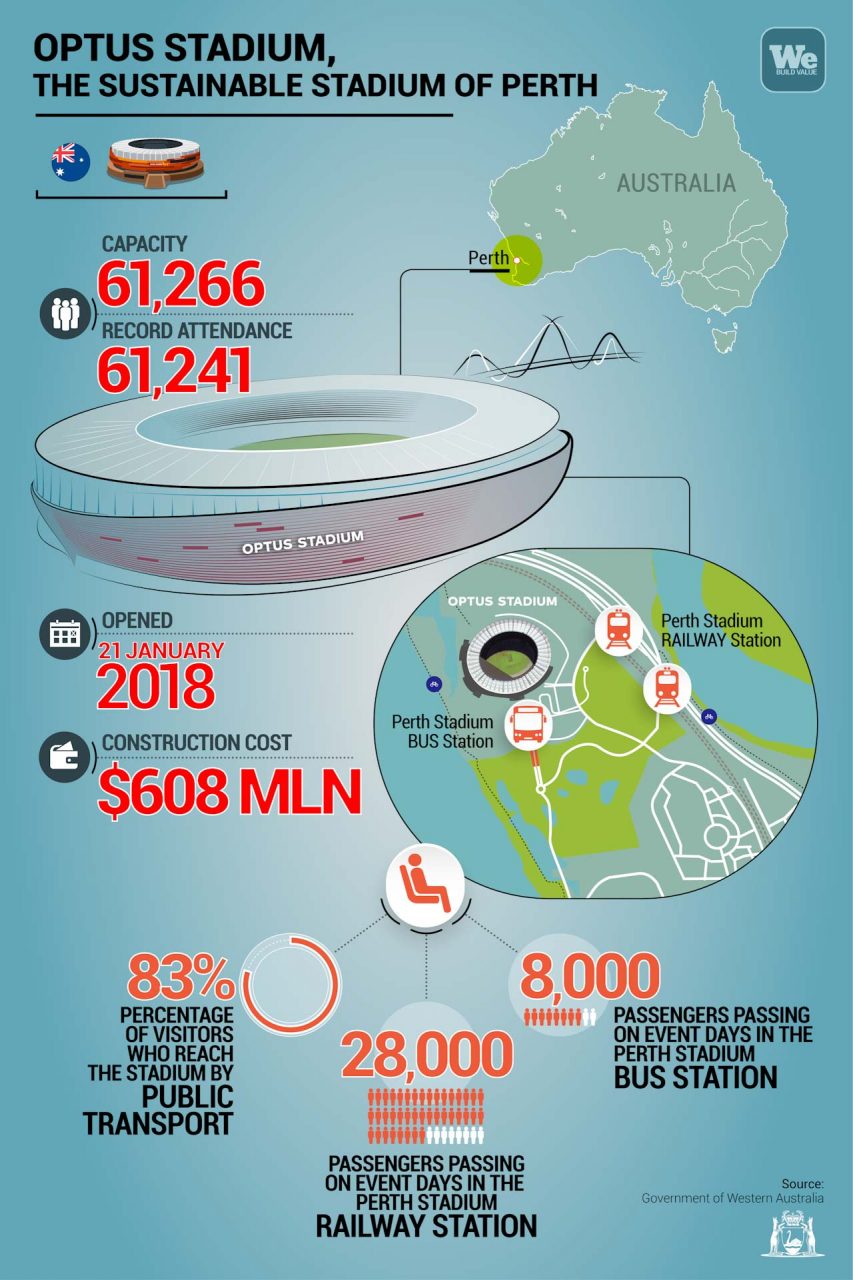 The focus on the stadium’s sustainability is not only on the structure itself, but also on the ways to reach it. The stadium is located on a peninsula that limits access to private cars. This is not a coincidence. The city administration decided that the structure must be accessed by public transport. The Perth Public Transport Authority aims for  83% of annual visitors and spectators to reach Optus Stadium by public transport. On the days of the events, on average, the Perth Stadium Railway Station and the Perth Stadium Bus Station serve 28,000 and 8,000 passengers respectively. Thousands of spectators then reach the stadium on foot.

Perth, the city of sustainable infrastructure

Sustainability is the watchword for Perth’s urban development. From the stadium to the airport, the metropolis has designed its infrastructures on “green” models that reduce congestion and help reduce air pollution.

Like the stadium, the city administration is now working to build the first fully carbon-neutral airport by 2030. Perth Airport will become one of the greenest airports on the planet, where even the amount of waste produced will be reduced by 20%, while the amount of recycling will increase by 70%. The development of the airport will reach its maximum impact with the completion of the Forrestfield-Airport Link, the new light rail link — commissioned by the Public Transport Authority of Western Australia and built by Webuild Group — designed to carry 20,000 passengers a day and take 15,000 vehicles off the road.

The 8.5-kilometre (5.3-mile) metro link is another of Perth’s great achievements, which, just like Optus Stadium, was designed to support the development of a modern metropolis, where size and population are not synonymous with chaos and pollution, but rather an opportunity to experiment with new models of sustainable and modern urban growth.