From North to South, the 75,000 kilometres of roads that unite America

USA: Civil infrastructure at the service of the Department of Defense

Rajean and Paul, a couple with a passion for art collecting, have just bought a painting at an art gallery in Sarasota, a colorful resort town considered the pearl of Florida on the southwest coast of the eternally-sunny U.S. state. “Would you like me to send it to you?” the artist asks. “No, we don’t need to, we can carry it in the car. It’s a trip we make twice a year, straight up the I-75.” The two collectors, 74 and 71 years old, are “snowbirds” — entire families who in the colder months move from the North to their second homes in the South, enjoying the mild, temperate weather, and return to the North when the oppressive summer heat begins.

The two live in Sault Ste. Marie, in Ontario, Canada, a city nestled in the Great Lakes area just over the U.S. border, at the end of Interstate 75, which originates in Miami like its twin I-95. This highway also heads into Canada, skirting the entire eastern flank of the United States until it reaches the Canadian province of New Brunswick.

According to Google Maps, the trip from Sarasota and Sault Ste. Marie takes just under 22 hours, which typically becomes at least 25-26 considering traffic slowdowns or construction along the way. “We, for years, have been doing it with only one hotel stop around Cincinnati. We switch driving every 4 hours and find time to take a nap while the other drives,” says Rajean. Some “snowbirds” make two stops, maximum three, before arriving at their destination. Traveling by highway from one end of the United States to the other has been a choice made en masse by Americans since the early 1960s, with the National Interstate and Defense Highways Act of 1956 signed by President Dwight D. Eisenhower.

The air transportation system is more than adequate – there are over more than 5,200 public use airports in America. Counting those for private flights and military use, the number of airports reaches nearly 20,000. Traveling by car is a therefore a conscious choice, not so much a matter of saving money or a decision not to fly. Rail links in many areas are not available. There is also room in the car for the dog, the cat, or, as in the case of Rajean and Paul, for a painting, a piece of furniture purchased on the way north or south, or a hope chest for their daughter moving to college. Along these Interstates, especially during the changing seasons, it is common to see entire columns of so-called RVs, or Recreational Vehicles, with cars in tow for short trips. The RV market in America was estimated at over $25 billion in 2021, according to Global Market Insights.

The history of America's great highways

America’s major transportation arteries were conceived two decades before the debut of Eisenhower’s infrastructure system.  According to legend, it was the 32nd U.S. President, Franklin Delano Roosevelt, who first envisioned during the Great Depression that a network of major toll roads would help stimulate the economy. FDR had a map of the United States brought to him, laid it out on his desk, drew three lines from East to West and three lines from North to South on it, and immediately asked the head of the Bureau of Public Roads, “Now build these roads!”

“The Chief of the Bureau of Public Roads is hereby directed to investigate and make a report of his findings and recommend feasibility of building, and cost of, super highways not exceeding three in number, running in a general direction from the eastern to the western portion of the United States, and not exceeding three in number, running from the northern to the southern portion of the United States, including the feasibility of a toll system on such roads,” the Act says.

Since then, the U.S. Interstate system has spanned more than 75,600 kilometres (47,000 miles) forming a grid that includes 610,000 bridges and more than 500 tunnels. Annual freight transportation reaches 11.9 billion tons. In the nomenclature of the Intestates, those with the odd number (of two digits) travel from North to South, the even numbers join America from East to West. Those with the final number 0 or 5 are the most important. 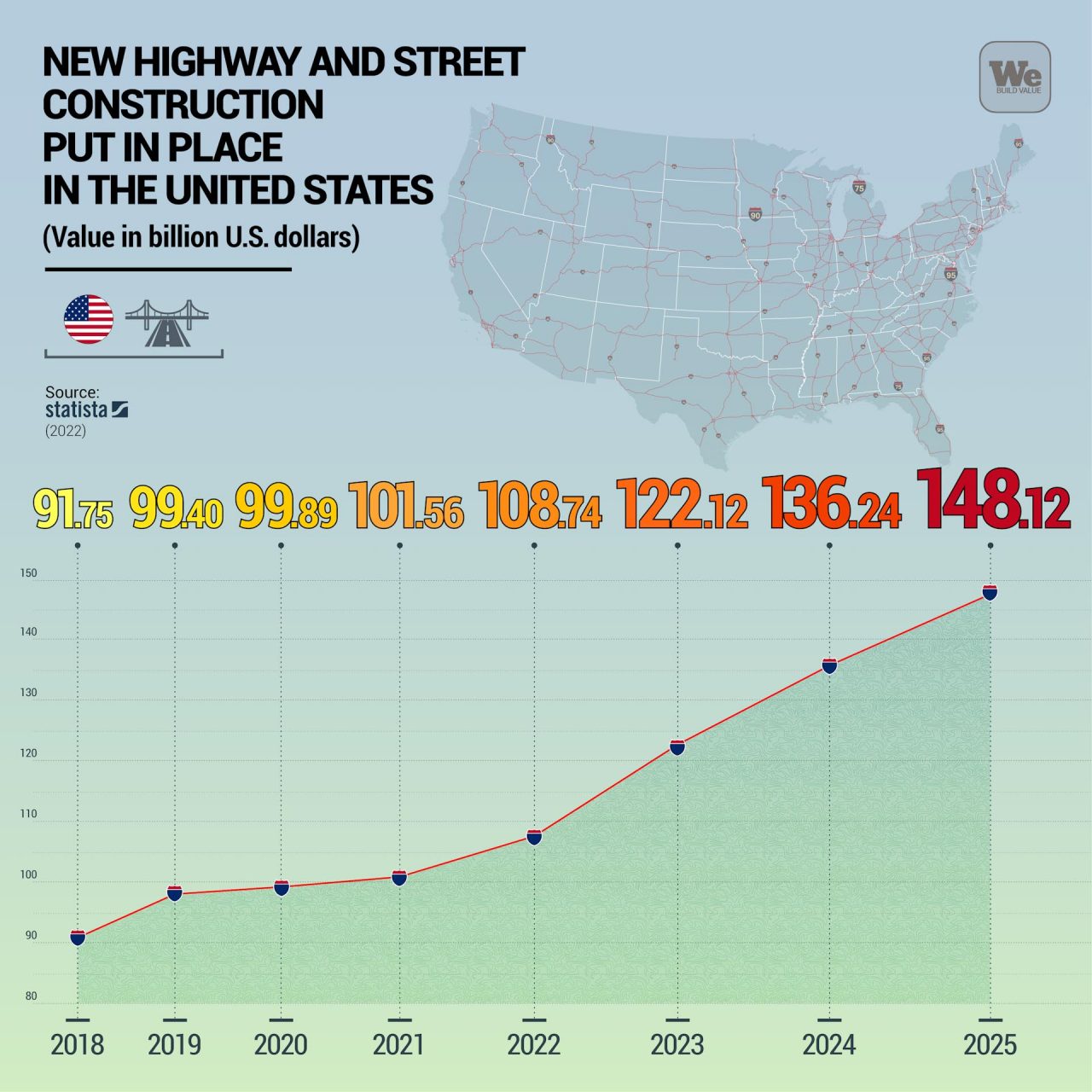 Work on I-75 began in 1957 and went on for nearly two decades, with various extensions from the original design. I-95 was started in 1956 and saw a long series of adjustments to the initial route having to serve major northeast coast cities such as Washington D.C., Philadelphia, New York, and Boston.

Around the major metropolitan areas, new interchanges, lane widenings, connecting interchanges, and, most importantly, Express routes were needed so that long-distance express traffic could skip the traffic jams around the various local exits.

Over the years, the most experienced companies in the industry have been called upon to contribute to the new routes. Lane Construction (Webuild Group) has been involved in the U.S. interstate system since its founding and, most recently, has put its stamp on the two Florida-Canada Interstates in Virginia with the extension of I-395 Express Lane near Alexandria, and the construction of I-495 Express Lane in Fairfax County.

I-95 is not the longest Interstate in the United States. That record is held by the I-90, which runs horizontally from Seattle (Washington) to Weston (Massachusetts) at 4,860 km (3,020 miles). Bu the I-95 is certainly the busiest, because of the large cities it encounters along its route. It is a historic infrastructure work for the country, and one that boasts many curious facts. Part of the route traces the path of the revolutionaries during the Revolutionary War of 1775-1783. The Delaware Turnpike section of the highway was dedicated by President John F. Kennedy, eight days before his assassination. Legend has it that in signing the go-ahead for the Interstate plan, Eisenhower saw the I-95 as the country’s main artery for military defense. That’s why the1956 law also bears the name “Defense Highways,” because during the Cold War it was intended to secure America a route to transport troops and armaments in case of invasion by a foreign power.