From water infrastructure to broadband, U.S. strategies to move past the Covid crisis

From the Everglades to the Mississippi, the U.S. is investing in environmental protection

“In the beginning” – of the early post-Covid world, that is – there was a sum: $1.9 trillion (€1.7 trillion), the basis for one of the most extensive economic recovery plans in the history of the United States of America. Two years after Covid-19 first broke out, the American Rescue Plan – a package of economic initiatives designed to cushion the blow of the crisis – has been put into effect. That $1.9 trillion is now being funneled into projects, job support policies, and opportunities for urban regeneration.

According to the U.S. government, the funds that were intended to provide an immediate response to the crisis has been embraced differently by different states. In particular, individual states have varied widely in their use of the $350 billion (€317 billion) distributed by the federal government to governors.

In analysing the ways that states and the federal government are currently spending the funds, it is clear that the American Rescue Plan is not only a vehicle for job support, but also an opportunity to launch new projects, including infrastructure initiatives (some of which are water-centric).

Water infrastructure and beyond: the American Rescue Plan’s large-scale works

The American Rescue Plan’s scope will include income support, training, health and social housing, but that isn’t all it will facilitate. Once funds are distributed directly to governments, they can also be used for strategic infrastructure and financing of long-stalled projects.

The key takeaway from the recent National Conference of State Legislatures is that to date, $11 billion (€9.9 billion) has been allocated to water infrastructure. Since the initial drafting of the plan, water (including wastewater) management systems in large cities have been identified as strategic by Congress. These plants will be essential in protecting U.S. cities and their residents from the effects of climate change, as well as from urban pollution. This is a particularly important issue across the U.S., where many large cities have launched projects to better manage wastewater from their rivers. For example, the capital city of Washington D.C. has a requalification plan underway for its major rivers, including the Potomac. The Webuild Group is taking part in this challenging project.

While water infrastructure is one of the most significant expenditures in the American Rescue Plan, it’s certainly not the only type of development underway. In fact, many states have used a portion of the funds to facilitate construction of new prisons. In Alabama, Governor Kay Ivey has indicated that construction of modern, more humane prisons will be a key priority for the state, investing $400 million (€360 million). Overall, $9 billion (€8.1 billion) has been allocated to building and road infrastructure, some of it for new prisons and some for mobility projects. Florida, for example, is putting $3.5 billion of American Rescue Plan funds toward construction of highways and other road infrastructure.

Individual states have taken autonomous approaches to the federal government’s plan to cushion Covid’s blow. States have aimed to respect Congressional direction, while reserving the right to adapt the initiatives to their needs.

Regarding the distribution of funds, “The Pew Charitable Trusts” carried out a study exploring what individual American states have spent, proportionally, in light of the federal resources available.

By contrast, some states could only count on a residual percentage of the 2020 budget. In Wisconsin, for example, Plan funds covered just 4.9% of the state’s annual budget. 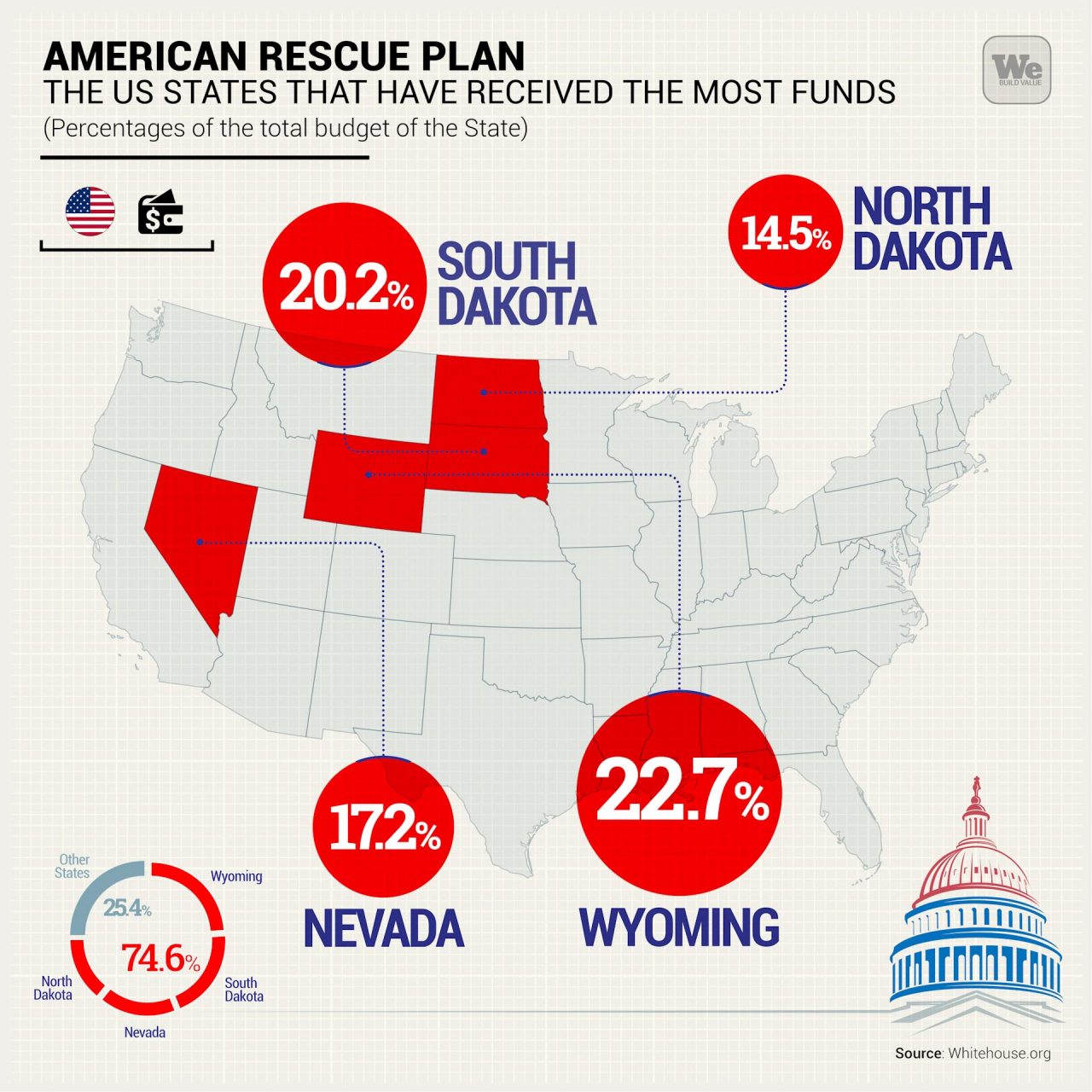 The American Rescue Plan funds can be spent until 2026. While states and the federal government continue to allocate these funds, the Build Back Better initiatives approved by Congress last November are also taking flight. An additional $1 trillion (€900 billion) will go toward large-scale infrastructures, for example. From bridges to highways and railways to tunnels, the U.S. is looking to infrastructure as a means of moving past the second “leg” of Covid. This new phase should usher in an exciting period of growth and development.