Ten stations opened in one fell swoop. And with them a 21-kilometre-long (13-mile) section in the southwest areas of Moscow, part of what will become a circular subway line. The record-breaking celebration took place on December 7 on Moscow Metro’s Big Circle Line (BCL), which is similar to Copenhagen’s Cityringen and the Grand Paris Express in the French capital.

Since the year it opened 1935, Moscow has never inaugurated 10 subway stations at the same time. This explains why the opening ceremony was attended by President of the Russian Federation Vladimir Putin, and the Mayor of Moscow, Sergey Sobyanin.

The new section, which is part of the entire circular line still under construction, serves the 1.4 million people living in 11 city districts, especially the 450,000 who live near the new stops, allowing travelers to save an average of between 35 and 45 minutes of travel time each day.

“Today is a historic day for the city,” said Moscow’s vice mayor in charge of transport Maksim Liksutov. “The President of Russia and the Mayor of Moscow have opened the longest section of the Moscow Metro in its entire history being launched at once.”

The opening of the first ten stations took place just a few months before the completion of the entire line, now expected between the end of 2022 and the beginning of 2023, when all 31 stations will be operational. Once up and running, Moscow’s Big Circle Line will facilitate movement for 3.3 million people living in 34 metropolitan districts and, with its total length of 70 kilometres (43 miles), will become the longest metropolitan ring in the world. The work meets a new urban planning need calling for circular lines to connect the peripheral areas in massive mega cities to the city center by exploiting existing lines. Webuild Group has achieved this in Copenhagen with the construction of Cityringen, capable of transporting 72 million people each year. And it is now working on the  Grand Paris Express, where it is participating in the construction of a total of 200 kilometres (124 miles) of new track that will connect the main districts of the urban area of Paris. 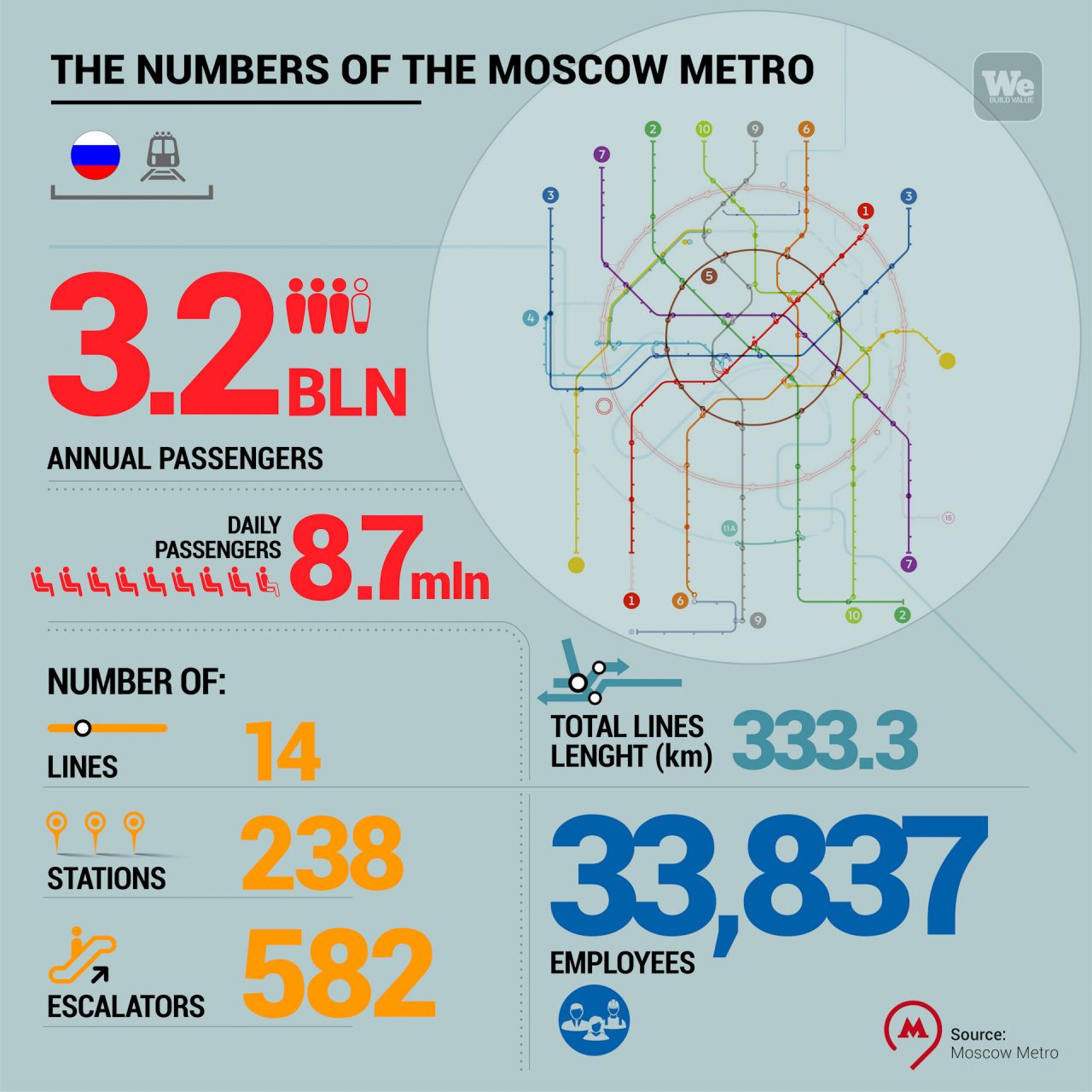 The city admistration sees the maxi circular line project as an opportunity to make a quantum leap in terms of sustainable mobility. It will also help stimulate the development of what has become Europe’s lagest urban conglomeration and one of the largest in the world, with about 20 million inhabitants in its metropolitan area.

Currently 70% of Muscovites use the metro on a regular basis, according to Deputy Prime Minister of Moscow City Government Marat Khusnullin, making it the city’s most common and popular form of transportation. The numbers tell the story of the city’s race for sustainable transport: it inaugurated 115 kilometres (71 miles) of new lines with 56 stations from 2011 to 2021. If we add the Big Circle Line to Moscow’s already-extensive current network, the result is the busiest subway system in Europe. After the inauguration of the first group of stations, construction work on the new line is going full speed ahead in the north area as well. The city administration is pushing hard to complete the project in a short time, as witnessed by the fact that there are up to 33 Tunnel Boring Machines at work in the city, 22 of which are running at once. They are designed to operate in the difficult weather conditions of the city, where the temperature in winter drops to -30°C (-22°F).

Construction sites are running day and night with the goal of completing the map of the city’s subway by 2023, a criss-cross of color-coded lines that intertwine to create one of the most extensive underground networks in the world.

Moscow, the city of rings

The first line of the Moscow metro was opened in May 1935. This infrastructure network has grown by leaps and bounds ever since, becoming not only a formidable mobility tool for residents, but also an attraction for millions of tourists. In addition to the functionality of the network, many stations are veritable works of underground art, while the most modern ones meet innovative criteria in terms of functionality and sustainability.

Over the years, even the metro has had to adapt to the characteristics of what is now called the “city of rings“. Within the metropolitan area, many transport infrastructures are in fact conceived as rings, be they road, rail or metropolitan.

The first circular subway line appeared between 1950 and 1954, when work was carried out on a section 19.4 kilometres (12 miles) long that runs right around the center of the city. Since then, other circular lines have been built. The Big Circle Line is the latest infrastructure marvel that aims to transform the Russian capital into an even more modern and sustainable city.