The infrastructure projects most critical for New York City

The city of fifteen minutes, this is the future of the megacities

From the Hudson to the East River, New York City is questioning its future. Once again, the Big Apple has experienced the momentous changes dictated by Covid-19 more than other cities, profoundly affecting its identity. Today it is planning for the next 100 years well aware of the road ahead. The city is making major investments in sustainability and infrastructure to get its economy moving again while supporting its green transformation.

The New York Building Congress (NYBC) recently published a list of the infrastructure projects that will have the most impact on the city over the next 100 years. The study clearly points to projects that are important from a sustainability point of view.

The list includes projects already underway, some still in the planning stages, and some still only being considered. The great bridges built between the 19th and 20th centuries are no longer enough, nor is the subway’s transportation capacity, anchored by one of the world’s oldest and largest underground transit systems. If New York City is to continue to grow, especially economically, it needs a new generation of infrastructure capable of supporting the transportation needs of the millions of people who work in the city but have chosen to live elsewhere.

The NYBC study identifies what it considers crucial projects to jumpstart the city’s economy, as well as to modernise the metropolis.

Among them is the completion of the Gateway Program, the rail line that connects Newark and New Jersey and runs to Penn Station in Manhattan. A few weeks ago, work began on the replacement for the Portal North Bridge in Secaucus, New Jersey — one of the bridges along which the aging rail line runs.

According to the NYBC, once completed, Gateway would serve 17% of the U.S. population in addition to generating $3 trillion (€3 trillion) in wealth annually. Currently — according to Bloomberg — the work is scheduled for completion in 2032.

In addition to the Gateway Program, there are numerous rail transportation projects considered essential to New York City’s future by the NYBC. Another is the Interborough Express, the $9.9 billion (€9.9 billion) line designed to connect Brooklyn with Queens; or the extension of the Second Avenue Subway, the new line that is expected to reach East Harlem with three stops, reaching a daily ridership of 300,000 people; or the further expansion of Penn Station, which is for the city’s logistics hub where subway and rail lines transit.

Even the Port Authority Bus Terminal, the historic layover just a stone’s throw from Times Square from which buses depart to half of America, must be rebuilt with an estimated investment at around €7 billion (€7 billion).

These projects, if completed as planned, will generate an economic impact of several trillion dollars, ensure service to millions of people as well as create hundreds of thousands of jobs. 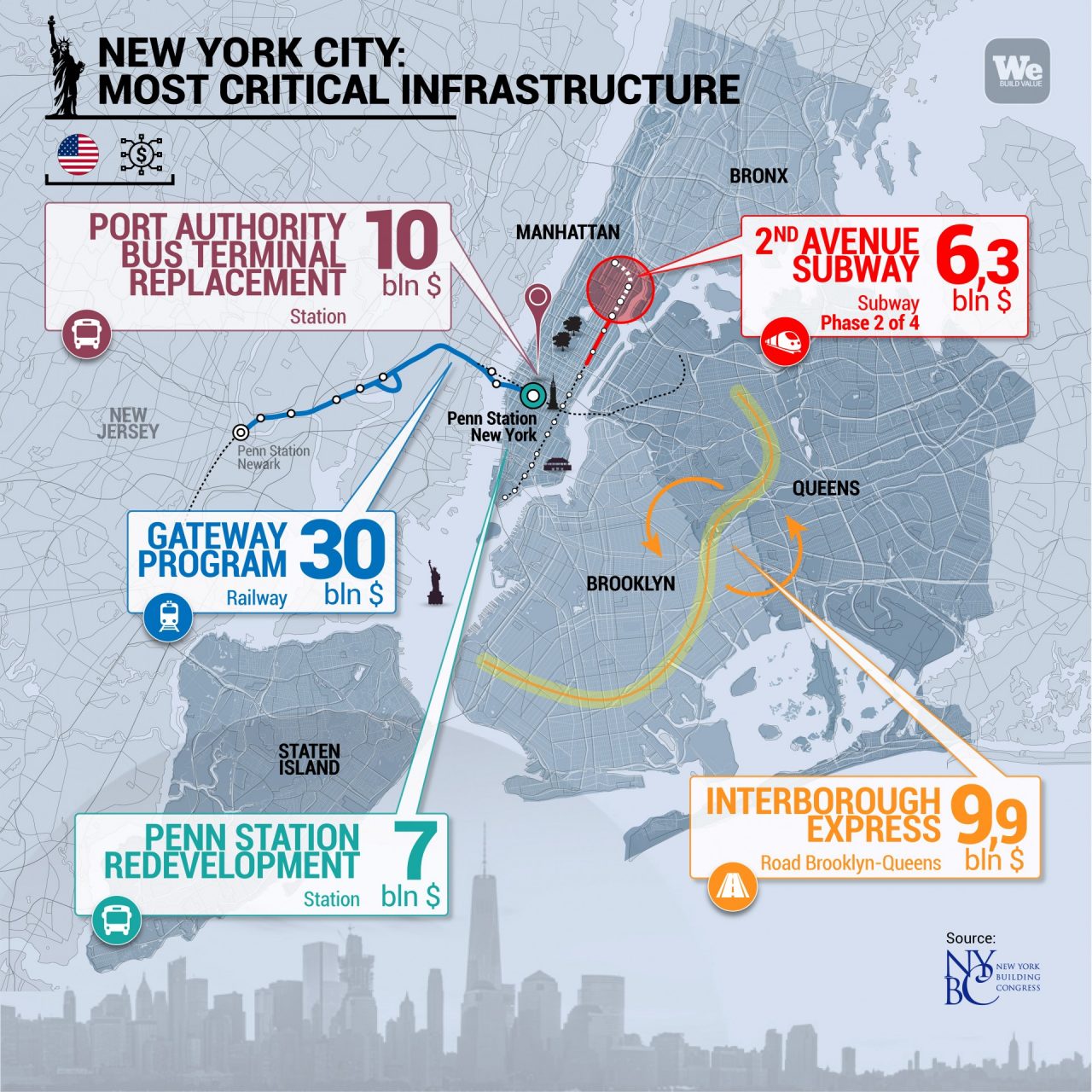 The role of sustainable infrastructure for New York City

Sustainability is the New York Building Congress’s dominant criterion for selecting the top infrastructure works needed for the city’s future. Railways, subway lines, pedestrian and bicycle paths, fast and low-polluting connections, facilities for better water management — all of these can help redesign the very image and soul of the great metropolis.

The NYBC, therefore, identifies new rail lines, a freeway connecting Brooklyn with Queens, the installation throughout the city of electric vehicle charging stations, and the creation of new pedestrian and bicycle paths as among the most urgent projects needed in the next ten years. On the one hand, reducing emissions by favoring rail over road transportation; on the other hand, managing infrastructure that responds to climate change such as the construction of new barriers on the rivers to reduce the increasingly frequent risk of flooding during late summer storms. A study by the U.S. Army Corps of Engineers also confirms that New York-New Jersey Harbour will be a high-risk area over the next 100 years for flooding because of climate change.

In fact, in July the Association released a 2020 Report Card for New York’s Infrastructure describing its condition as “mediocre,” specifying that both the wastewater management system and half of the state’s roads are in “poor condition.”

ASCE’s 2022 Report Card for New York’s Infrastructure said that 10% of the state’s bridges are in poor condition, worse than the national average of 7% — despite some major interventions such as the $3.98 billion (€3.8 billion) construction of the Governor Mario M. Cuomo Bridge.

The federal government has supported the state’s economic effort by providing $11.6 billion (€11.6 billion) to invest in the highway network and $1.9 billion (€1.9 billion) for bridge rehabilitation in the Infrastructure Investment and Jobs Act.

These funds, while needed, are not enough to meet the need for renewal in the state and especially in New York City. Over the next 20 years, ASCE says that the state needs to spend $38.4 billion on upgrading the drinking water system, and that New York’s mass transit network faces a $26.6 billion capital funding gap through 2024. The Big Apple now faces yet another major challenge, one that will be vital for carrying it into the future.

The London Underground in service to the Queen