Some have already dubbed 2022 as the year of the “Great Deluge.” In Australia’s history, 2022 will be remembered for its overwhelming rainfall, an effect of climate change that damaged both people and infrastructure, resulting in considerable costs to state governments as well as the community.

The big rains that battered coastal areas of Queensland and New South Wales between last February and March resulted in 236,000 insurance claims calculated at AU$5.5 billion (€3.55 billion), costs that fall on Australians themselves through higher insurance premiums.

But higher insurance premiums are not the only cost of the immense rainfall. The state of New South Wales alone has estimated that the rains have caused AU$1.5 billion (€970 million) in repairs to infrastructure which now needs urgent maintenance.

Climate change is hitting the country hard at a time when major cities are at the center of ambitious urban redevelopment through such infrastructure projects as airports, subway lines, and surface railways. This major economic development opportunity must be protected first by taking action to minimise the negative impact of extreme weather. 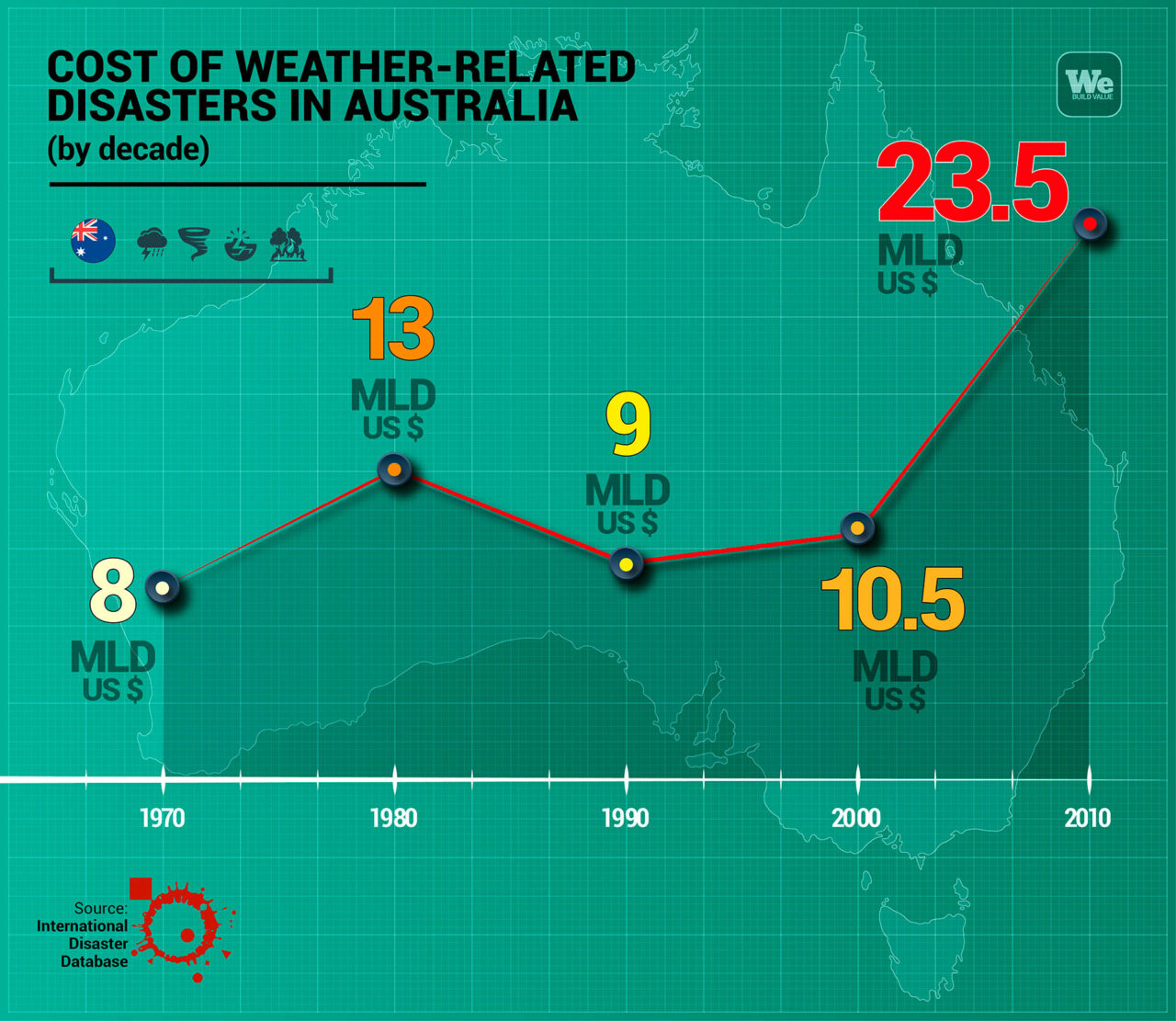 Queensland, New South Wales and Victoria are the most affected states

Queensland is one of Australia’s most vibrant states, and Brisbane is one of the cities at the centre of a profound transformation. This is also why weather events have affected it economically more than others.

In 2022, Queensland will bear an estimated social, financial and economic cost of the big rains seen at AU$7.7 billion (€5.0 billion). Insurance costs incurred by the city of Brisbane are AU$1.38 billion (€892 million), the highest figure of any Australian city.

Like Queensland, New South Wales and Victoria have also been hard hit. The rains pummeled both Sydney and Melbourne, plus of course the interior regions, causing extensive damage. Last spring’s floods are predicted to ruin 10 million tons of grain costing producers an estimated AU$5 billion (€3.2 billion). 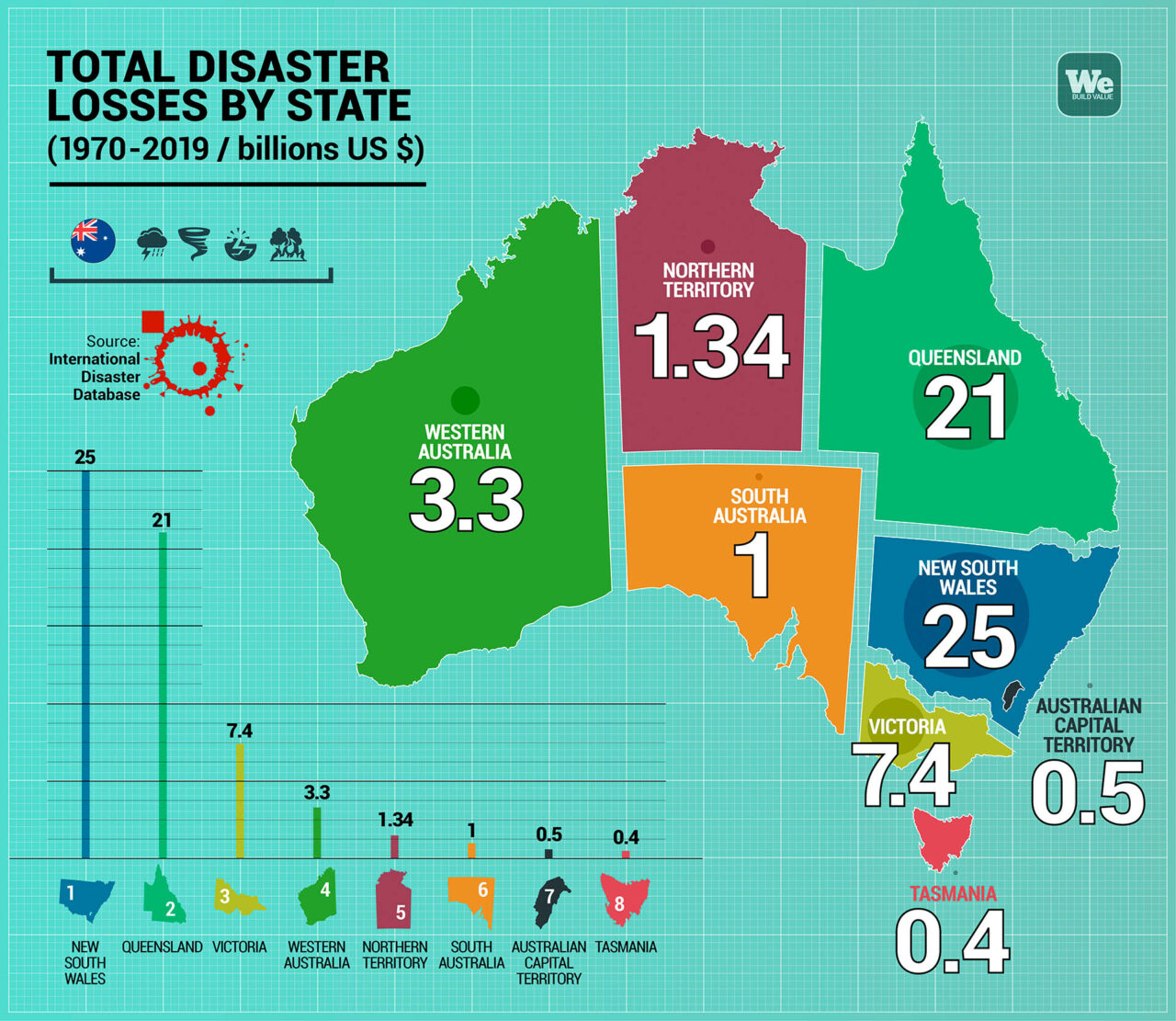 Floods in Australia, investing in infrastructure: top priority in the coming months

One of the pillars of Australia’s state government plans to cope with extreme weather is based on strengthening the country’s infrastructure network. Weather events caused considerable damage to major works, requiring many to be secured and others rebuilt from scratch. In Queensland’s southeast, damage to public infrastructure has been estimated at AU$492 million (€318 million), and planned investments include securing 1,718 kilometres (1,067 miles) of state roads and railways.

Also in New South Wales, last February’s rains caused damage to 2,000 kilometres (1,242 miles) of state and local roads, while the cost to restore the affected works was estimated at $1.5 billion (€970 million).

Highways, bridges and railways, and power grids were also affected, so much so that – according to the November 2022 study “The great deluge: Australia’s new era of unnatural disasters” carried out by the Climate Council — floods in New South Wales caused numerous blackouts forcing residents to go without power for up to 13 days.

Action to fight climate change is needed, and at the same time communities most affected by extreme weather must be secured, and the smooth functioning of their infrastructure guaranteed.

The Australian federal government’s Final Budget Outcome showed that $24 billion (€15.5 billion) was spent for the period 2005-2022 specifically to repair damage from weather events. These funds, however, are insufficient compared to the actual needs coming from all states.

Today each state fends for itself, trying to respond to emergencies with its own finances while at the same time continuing to spend on the urban redevelopment projects started in recent years. The infrastructure that has just been completed, together with that now under construction, will enable Australia to reduce the devastating effect of a climate gone mad by protecting residents as well as businesses.

Ports and ships, the new infrastructure needed for LNG